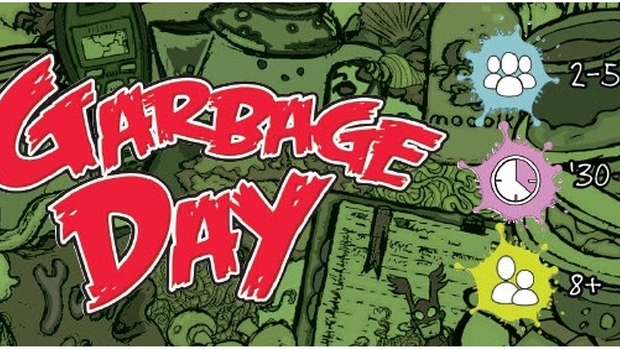 One of the chores assigned to me at home is taking out the trash.  It’s not a fun job, especially when animals have somehow gotten into the garbage, digging for whatever treasure they can find.  Mayday games wants to make that chore a bit more enjoyable with their upcoming Garbage Day game.

No one likes to be the one to finally take out the garbage and Garbage Day is a battle of wits between you and the other players as you each dodge this responsibility. Between stacking garbage cards and mischief cards onto the garbage can centered on the table, players are sure to use their best judgement about what, where and when to stack their garbage cards on to the already overflowing garbage can.

Garbage Day is played with 2-5 players, ages 8 and older and takes approximately 20-30 minutes to complete. Each game comes with 87 garbage cards, 21 mischief cards, 5 room cards and 1 garbage can (we promise it’s clean). Garbage Day is expected to be available Q1 of 2016 but will be coming to Kickstarter in the next few weeks and will retail for $20.00.

Mayday had a hit with their dexterity game Coconuts, but this looks like it has a bit more strategy to it than monkeys flinging small bits.  It’s good to see dexterity games adding a bit of strategy to them.  You can find out more when the Kickstarter launches.  Mayday has produced some great games for not a lot of money, so be sure to check it out next month.