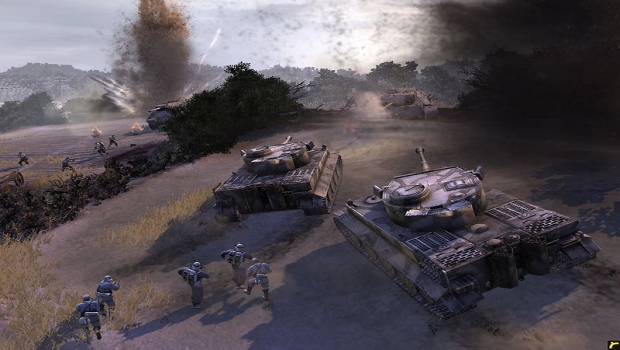 Welcome back to Games for the Masses, where you pay less to play more!  This has been a good week for the gaming proletariat, comrades.  Though Microsoft attempted to squash  us with their oppressive DRM heavy Xbox One, Sony emerged as a Hero of the People.  By swiping away Microsoft’s capitalist schemes, the Playstation 4 has proven itself worthy to be awarded the the Great Red Star of the Proletariat.

However, in the week after E3, there are many excellent games with which we can celebrate.  The best game out there this week is the Company of Heroes: Complete Edition.  Dating back to 2009, Company of Heroes and its expansion Opposing Fronts, remains one of the landmark games in the modern RTS.  Developed by the legendary developers of Homeworld, CoH is on sale in anticipation of its sequel, due out in about 2 weeks.  Other great games on sale this week are:

The Witcher 2: Assassin of Kings ($7)–If you have a computer that can run it, and a lot of spare time, you will rarely find a more breathtaking game than this.

The Walking Dead ($13)—Very few other games will ever be able to elicit such a visceral emotional reaction.

Blackwell’s Asylum (FREE)–Apparently released to the public, this survival horror will keep you on your toes with its disorienting level design and art style

EVE Online ($5)–Anybody who ever wondered how massive events like the Battle of Asakai are possible  should give this one a try.  Put simply, things happen in EVE that could not happen in any other game.

Fans looking for a few good games all at once might be interested in picking up the Square Enix Gamer’s Bundle on Amazon.  The pack includes steam keys for Deus Ex: Human Revolution, Hitman Absolution, Just Cause 2, and Sleeping Dogs.

Humble Bundle 8 is still going on, check it out if you want some awesome walking games!

The Humble Weekly Sale focuses on 11-bit Studios!  If you’ve never had a chance to play the awesome Anomoly: Warzone Earth, it’s a really great attempt to deconstruct and reverse the tower defense genre.