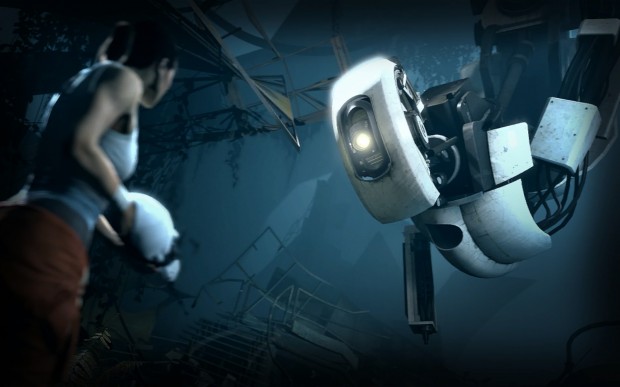 Welcome back to Games for the Masses–we help you pay less to play more!  If last week’s selection of proletariat-friendly prices were somewhat lackluster, a single game makes up for it: Portal 2.  If you’ve never played this gem, you have no excuse: it’s less than five dollars.  it’s longer than you’d expect, has great puzzle action, and is the funniest game to come out since…well, since Portal.  Don’t think about it; just do it.

What else is on sale this weekend?  Let’s have a look, Comrades.

Burnout Paradise: The Ultimate Box ($5):  A modern classic in the racing genre.  The last true entry in the Burnout series for a while, this frenetic racer ditches the closed tracks of previous titles for an open world brimming with buildings to jump off, billboards to smash.  Oh, and you’ve got plenty of cars to cash.

Crysis: Maximum Edition ($8):  When it dropped onto the scene in 2007, Crysis established itself as one of the best-looking games of all time.  But there’s more to this one than just a pretty face–the gunplay is satisfying, and the player’s nanosuit gives you a wide range of options when attacking an enemy force.  Personally I always preferred the Predator–swooping in for the kill, then using the camouflage to baffle my pursuers.  Also included is the sequel / spinoff Crysis Warhead, a more action packed, linear story starring the best Jason Statham impression you’ll ever see.

Dragon Age: Origins – Ultimate Edition ($8):  If you want value, this is your choice.  There is an unbelievable amount of content in Dragon Age: Origins, and you’ll get most of the the RPG’s considerable DLC as well.

TellTale Games are on sale at GoG.com.  You won’t find the now-legendary Walking Dead, but you can get shiny new Sam and Max or Tales from Monkey Island

We’ll wrap things up with the latest Indie Royale treat: the Debut 2 Bundle.  I was a bit apprehensive when I saw the aggressively mediocre Croixleur in there, but the bundle is cheap and I’ve got to be honest: Dawnstar has one of the funkiest trailer soundtracks I can remember.  The game looks to mix smooth jazz, loose morals and space trading in a really interesting way.

That’s it this week, but what a week it is.  If you can’t find something you like on sale, you’re one tough cookie.  If there’s something I missed, email me to let me know.  But until next week, Game on Comrades!