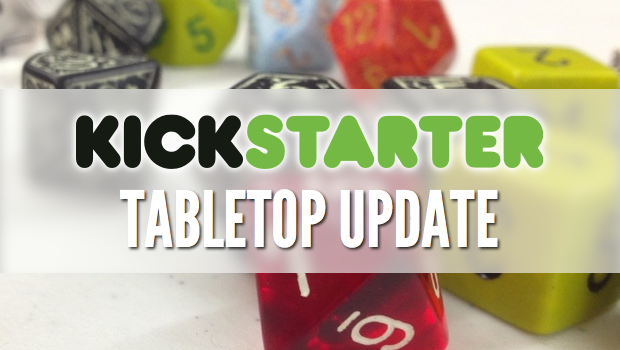 Hello! Welcome to Friday Tabletop Kickstarter Update! For info on what is going on here, check out this introduction. It may still be snowing here in New England, but elsewhere new growth is starting to break forth, just like these games. All of these games look like they are going to be awesome when they are fully developed and sitting on your table.

Ninja Division is running another mini-filled campaign, Ninja All-Stars. Clans of fighters enter the Moon Festival to brawl it out for dominance. Players use various combinations of dice and cards to out maneuver and attack their opponents. Never one to shy away from miniature molds, Ninja Division seems to have taken the add-on options to a new level with long list of extras. Fans of Ninjas, miniatures, or cute chibi faces need to go look at their campaign.

In the realm of proven Kickstarter designers, Dr. Steve Finn is running a campaign to fund his latest creation Cosmic Run. Dr. Finn focuses on games with simple mechanics in a short time frame, but ones that offer great depth. In Cosmic Run, players are attempting to establish colonies on foreign planets before being bombarded by deadly meteors. I have never been disappointed in a Dr. Finn kickstarter, and this one is well worth a look.

Who doesn’t want an amazing treehouse?! Green Couch Games has teamed up with kickstarter legend Scott Almes (Tiny Epic games) to bring a new family oriented card game to the kickstarter community. In Best Treehouse Ever, each person drafts cards to form their very own treehouse. The cards represent various rooms that might be added. But be sure to check the placement of these rooms as an uneven tree house will surely fall over. That art alone is worth taking the time to look over the campaign page.

Starting with a rather unique idea, Sean McDonald set out to make a cooperative racing game; two themes, by themselves common, that are not normally thought of as complementary. Using amazing train robber meeples, players run around the barren countryside trying to loot the passing train. The main mechanic players are using to perform actions is forming poker hands from a special set of cards. This pleasantly unique game is one I would love to try.

Ever since the world met the boy who lived, people have longed to attend a magical school filled with wizards, witches, and mythical creatures. Wizard’s Academy throws players into a world of enchantment and lets them live out this dream. Characters will use their limited knowledge to fight trolls, imps or demons… unless they accidentally summon them by mistake. They are just students afterall! Not only does the art look cool but the games boasts some innovative mechanics for players to discover.

Many games gloss over the fact that fighting a war using a horde of Orcs is going to need some basic supplies. Trees are going to need to be chopped, metal mined and farms tilled. Battleborn Legacy has all the things you normally find in a fantasy combat game, but add a layer of resource management along with spell casting and combat. Just watching through the intro video leads me to believe there is a lot going on in the game, I just wish there was a little more info, or pictures available. Go see for yourself.