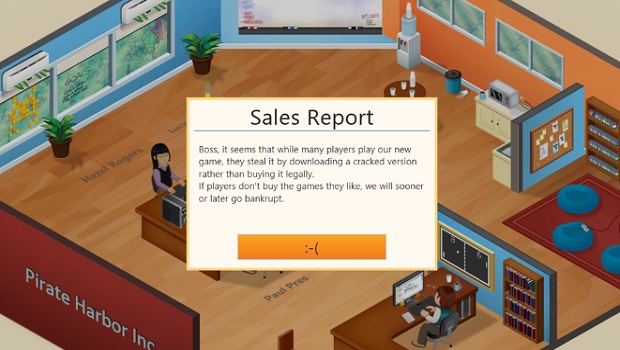 Piracy has become ubiquitous in the world of PC gaming, even as developers and publishers play around with DRM (to varying degrees of success) in an attempt to stop it. So when Patrick and Daniel Klug, the two-man team behind Greenheart Games, released Game Dev Tycoon to to the world yesterday, they were proactive. Minutes after making the game available for purchase, the developers uploaded their own cracked copy to a file sharing website and waited for the inevitable. That was yesterday; today, more than 9 out of 10 people playing Game Dev Tycoon are playing a pirated copy. But how do the pirates like it when the tables are turned?

As the title suggests, Game Dev Tycoon is a business simulation game that allows players to “replay the history of the gaming industry by starting your own video game development company in the 80s. Create best selling games. Research new technologies and invent new game types. Become the leader of the market and gain worldwide fans”. In the process, they’ll have to contend with changing technology and, among other challenges, piracy.

Those who downloaded the cracked copy of the game will have a particularly hard time though. As Patrick Klug explains on the Greenheart Games blog:

The cracked version is nearly identical to the real thing except for one detail… Initially we thought about telling them their copy is an illegal copy, but instead we didn’t want to pass up the unique opportunity of holding a mirror in front of them and showing them what piracy can do to game developers. So, as players spend a few hours playing and growing their own game dev company, they will start to see the following message, styled like any other in-game message:

“Boss, it seems that while many players play our new game, they steal it by downloading a cracked version rather than buying it legally. If players don’t buy the games they like, we will sooner or later go bankrupt.”

Slowly their in-game funds dwindle, and new games they create have a high chance to be pirated until their virtual game development company goes bankrupt.

The irony is brilliant, although apparently wasted on many pirates who soon took to message boards to ask for help with combating piracy in the game while ignoring the real world impact of their own actions:

Game Dev Tycoon is DRM-free and affordable at only $7.99. A purchase nets you PC, Mac, and Linux versions, the ability to install it to up to three devices for personal use, a Steam key when/if Game Dev Tycoon is Greenlit, and the warm fuzzy feeling of helping out a small indie start-up. Really, why wouldn’t you buy it?

You can read the full explanation of events at the Greenheart Games blog here, and you can buy the game or try the free demo here.