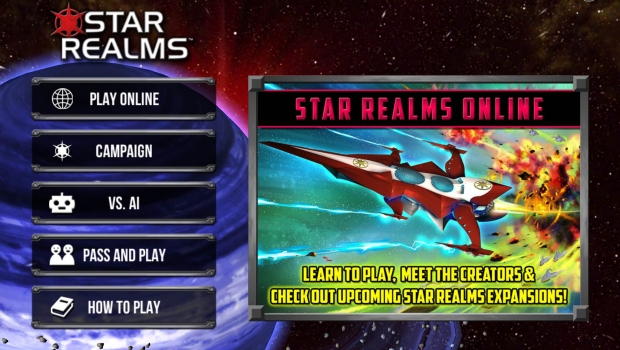 While it appears that deckbuilders are slowing down, Star Realms seems to have taken the gaming world by storm.  With a low price point in both physical and digital versions, it has shown a lot of staying power.  Not long ago the Gambit card expansions were released in physical form.  On Thursday, all of the digital versions will get the Gambit expansions as well.

Our fans have been clamoring for new expansion sets in our digital app, and this Thursday, their wait will be over. Star Realms Gambit Expansion will be released onThursdayMarch 5th at 12:01am for PC and Mac. It will be released later in the day on the iOS App Store (for iPhone and iPad) and also on Google Play for Android devices.

The price is $3.99, and it requires purchase of the main game ($4.99). The new digital Gambit Expansion includes all the Gambit and promotional cards from our Kickstarter physical card set.

Rob Dougherty, Gambit Set Designer and White Wizard Games CEO, said, “The Gambit set is my favorite expansion from the physical game.  I love how you don’t have to wait for Gambits to come up out of the trade deck. They start right in play and give you powerful new options starting from the very first turn of the game!”

Darwin Kastle, Star Realms Lead Designer, said, “Many Star Realms fans might find it hard to believe, but with the Gambit expansion we’ve added even more depth, more features and more fun. Not only have we added a new card type, an online leaderboard and new campaign chapters, but we’ve also added some really cool new ships and bases. Four new bases introduce a different type of base-oriented strategy. Each faction also gets a game-changing new ship and there’s even a mercenary ship that combos with any faction. This is going to really shake things up and allow players to explore new strategies and options.”

The actual game is $15 to hold in your hand, with another $10 for the Gambit expansion.  Paying $5 digitally and another $4 to expand it is a great deal, and you can try the app for free.  If you haven’t played Star Realms at all, you don’t have any excuse not to check it out now.