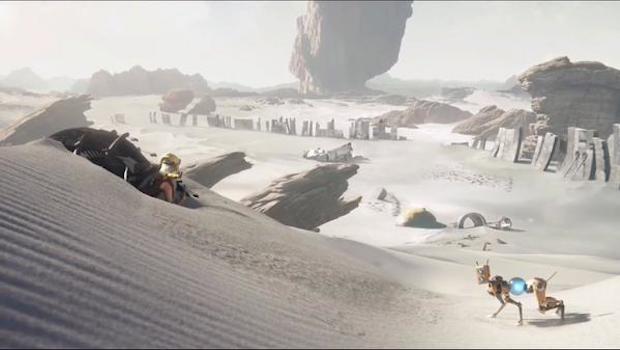 A trailer for a new adventure title from Keiji Inafune and the makers of Metroid Prime, dubbed “Recore,” premiered today at the Xbox E3 press conference. The title will be a first-party Xbox One exclusive and be released in spring 2016.

A pre-rendered video showed a young girl and her robot-dog companion traversing a vast desert wasteland, taking shelter from an incoming sandstorm in the wreckage of a giant machine.

Later in the trailer, the girl and her dog encounter a horde of robots who were, like her dog, powered by an orb core. She pulls the core out of an enemy robot and pockets it, and her dog fights off enemies and eventually blows itself up to save her. The girl then picks up the core and sticks it in a nearby robot, bringing the companion back to life in a new body.

We’ll bring you further details as we hear more about this first-party exclusive for Microsoft.