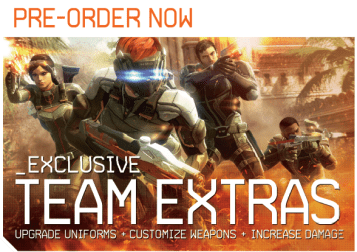 Fuse is looking sweet, and as we get closer to release day we’re starting to see a steady stream of information on the game. EA and Insomniac Games have just announced the goodies available for those who pre-order the game before its Spring 2013 Launch. For those who plunk down the scratch to secure a copy at their favorite local or internet-based retailer, you’ll be snagging a couple extra skins and an additional perk for your squad:

The bonuses seem interesting enough to warrant the pre-order, but not so necessary to create an unfair advantage for players who don’t want to put the money down just yet. This also independent of specific retailers, similar to the Limited Editions EA uses for pre-orders of their other games. Whether other retailers will get more specific content down the line remains to be seen, but for now this is a nice little incentive. Keep your eyes peeled here for more information on Fuse as we near the Spring 2013 launch for both Xbox 360 and PS3.