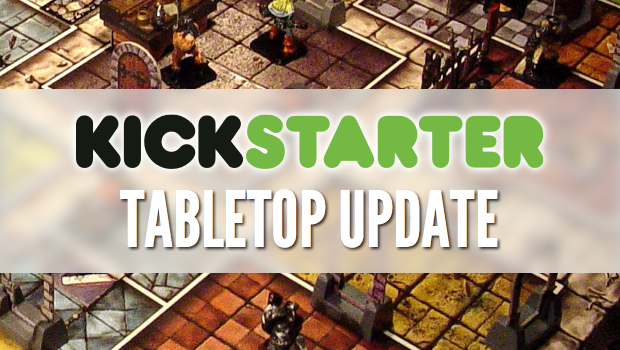 Welcome to another Friday Tabletop Kickstarter Update! Below are a handful of games that look interesting enough to check out. If you want to know more about what this FTKU thing is, check this out.

While Steampunk is quickly becoming clique in the boardgaming realm, Heavy Steam deserves a little attention. Full of plastic and rather impressive looking art, Greenbrier Games promises a game that will appeal to both miniature gamers and resource management enthusiasts.

I don’t know how a bluffing game can contain absolutely no lying. Good Cop Bad Cop claims to have done it. In addition, player elimination is supposedly handled. Fans of social deduction games should look over the campaign page.

Back for more, Agents has returned to KS for what looks like a reprint. The first edition of Agents successfully funded and delivered last year, but are looking for more funds. This card game’s claim to fame is a dual sided card mechanic, where one side will be good for you, but the other will benefit your opponent.

I have a soft spot for games based in/on technical themes. Linkage was designed with an eye towards the genes inside of everyone. Players compete to copy a string of DNA while avoiding mutations flying in from opponents.

Contemplating when to buy: Kickstarter or Retail
Weekly thoughts on the world of Tabletop Kickstarter

Generally the goal of any boardgame publisher is to make money. The primary way to achieve this is to get their games into the retail system, either in small game shops, mass market retail chains or online stores. This widens the exposure of their games and gives us, the consumers, access to many different products.

Kickstarter changes this dynamic significantly. Previously, publishers would have to invest a significant amount of capital up front to produce their games, and retailers tended to favor larger, established and/or consistent publishers. The consumer was at the whim of what publishers thought they could publish and what retailers thought they could sell. With the power of Kickstarter, publishers can go straight to the consumer at drum up support. Similar to pre-order tactics of old, publishers can gauge interest and collect funds upfront before investing in production. Ideally, the cost to the consumer would be lower, and the risk to the publisher would be non existent.

Today I want to take a little look at the financial impact to you and I, the consumer of Kickstarter games. One major complaint of KS campaigns is that the backer levels before production are higher price points than retail costs after the game has been produced. The argument being that, assuming that the game is actually produced, it is better to wait and buy retail. Both from the perspective of cost to the consumer and risk of receiving the product. Saving money is obvious, but the latter point is only understood when you take part in a project that fails to deliver. Once in the retail system, by definition, the game has been produced.

I am going to look at every game that I have backed that has also been released to retail. My analysis will be based on the lowest reward level that included the game, the current listed MSRP and the general purchase cost from online retailers. It should be noted that most Kickstarter campaigns include free shipping to the US. I would argue that most online retailers also offer free shipping above a certain purchase point. In addition, if you drive to your local game shop, you are going to hang out and play some games, so travel cost is also negated.

My study looked at 32 games that have been Kickstarted and delivered in the past year and a half. The games range from light filler games to plastic laden miniatures games. The lowest pledge level was $15 and the highest was $90.

Let me break down the above graph. This graph is showing the different costs associated with games that are currently selling for a lower price than I backed. Each triplet of data is one single game. The green bar represents the KS backer level, the red bar is the listed MSRP and the blue is the common price for the game at online retailers.

Some interesting statistics: Comparing the MSRP and backer level, the median discount to the backer is almost $5, with an average discount of $6.30. The maximum discount was Alien Frontiers 4th Edition, with a discount of $25 off MSRP, and the Compounded backer level was actually $7 higher than MSRP. These numbers do not surprise me all that much, most game companies will tell you this upfront, often times in the description of the Kickstarter pledge level.

We all know this is not really the whole story though… the MSRP is rarely what the consumer will actually pay for a new game, especially from an online retailer. So looking at the difference between the KS pledge level and current prices online, the median was backing at $5 higher than current prices with the average just a little higher at $5.32. In my particular study, the worst culprit is Castle Dice currently priced $21 lower than the KS backer level. On average, the backer levels were 14% higher than what online retailers are asking for.

To be clear, the above graph is showing the distribution of discounts by online stores. A higher percentage means that the game is selling for less then backers backed at. Six games are currently more expensive than when they were on Kickstarter, but twenty three can be purchased for less than their original backers paid.

The most important thing to remember when thinking about this sort of thing is that some of the games in this study would not have been produced without the support of backers. True enough, some of these games were well on their way to retail long before being Kickstarted (I am looking at you Freedom: The Underground Railroad). However some just barely reached their funding levels. Also, don’t forget about the perks that some publishers thrown in with their Kickstarters (see last week on Exclusives).

So next time you are about to back something, take a look and see if it is already funded. If so, it is highly likely that the game will reach retail at just about the same time that backers receive their rewards. If the pledge levels don’t include that many exclusives, and the deal does not seem too good to be true, you are better served just to be patient and wait.