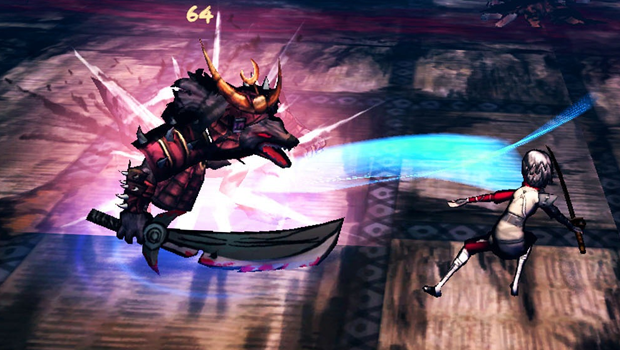 Akaneiro: Demon Hunters, the game with the somewhat confusing kickstarter status, is now live. With 68 hours left on the kickstarter as of this writing, no less! The one-line summary of this game is “A unique ARPG with classic design sense meets fast-paced action, inspired by Japanese themes and the Red Riding Hood tale.” That’s not much information to go on, really, so let me take a stab at it: so far the game’s a kind of artsy-japanese themed Diablo-style game, but far less intense than what you’d expect from those titles typically. So, expect a good amount of grinding, some random loot, some crafting – if you’ve played those games, you’re getting the gist of Akaneiro. Some more, fast impressions after the cut.

While I haven’t dived very deeply into this one yet, so far I’ve got to say… it’s a pretty nice stab at the Diablo/Torchlight model of games. A bit more streamlined than those – the areas and missions are apparently randomized, usually giving you a straightforward task of ‘get in there and kill everything’. Along with the grinding comes the usual loot-gathering you’d expect from a game like this, and there’s a fairly decent variety of weapon and armor types to be had. It’s a more streamlined experience than these games tend to be – each level up gives you a choice between one of three upgrade options (offense, defense or skill, basically) along with some corresponding stat upgrades. Right now there’s no actual co-op, but it does boast some asynchronous multiplayer features I haven’t been able to play around with yet.

Really, I have to say… I was prepared to have an immediate “meh” impression of this game, but after giving it a shot, it’s growing on me – and I have to admit, it seems like a title with a lot of attention. If you’re into the hack and slash thing, be sure to give this one a try.