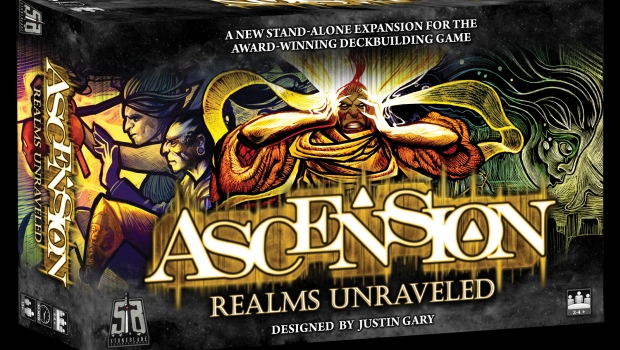 I really like Ascension because of how your strategy needs to change with the cards shown in the center row.  I also like how they have released a full four-player version and later a two-player version as a stand alone expansion.  Each of the three sets has also added new artwork and game mechanics, so each game feels like a different experience.  Now Stone Blade has announced their fourth full Ascension game is coming in June.

Stone Blade Entertainment, the gaming company behind the award-winning board game and iOS app, Ascension and the cross platform digital collectible game SolForge, today announced the newest release in the Ascension franchise, Ascension: Realms Unraveled, coming to stores in June of 2014.

Playable as a standalone one to four player game, Ascension: Realms Unraveled can also be combined with other Ascension games to explore the world of Vigil with up to six players.

“We’re excited to bring our fans another new experience in the Ascension universe, and continually humbled by the incredible response we have had to the game since its release in 2010,” said Stone Blade Entertainment founder and CEO, Justin Gary.

Stone Blade Entertainment’s newest expansion, Ascension: Realms Unraveled includes cards that belong to more than one faction for the first time. These dual-faction heroes help enable the new mechanic in the expansion, called Multi-Unite, which allows players to reap huge rewards for playing many Heroes from the same faction. Additionally, Realms Unraveled expands upon the Transform mechanic, allowing players to turn their cards into new, more powerful versions as the game progresses.

I really enjoy all of the mechanics that have been introduced so far, and I’m glad to see something new coming in the next set.  Having cards associated with more than a single faction could make for some interesting new strategies.  June can’t come soon enough.