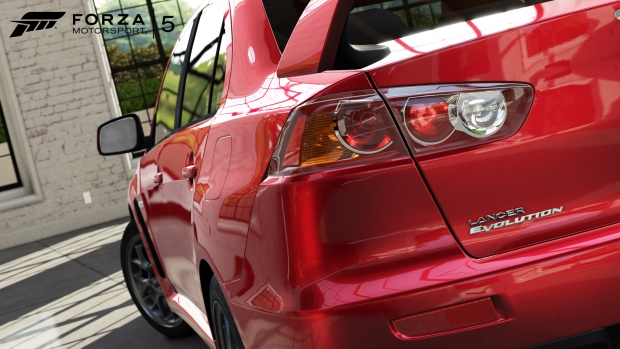 If you’ve never heard of the Forza Motorsport series, then perhaps you don’t like racing extremely detailed cars of all makes and manufacturers, even Porsche-likes under the RUF brand. The critically acclaimed series is due to be released on the Xbox One on November 22, and they’ve just opened up the Showroom to check out some of the upcoming cars. This week, it’s a 2008 Mitsubishi Lancer and a 2002 Nissan Skyline in the limelight. You can check out more info and pics below, including a list of all previously announced cars.

[singlepic id=16377 w=320 h=240 float=right]When Mitsubishi designed an all-new Lancer, the basis of the Evolution X, they built a healthy dose of pure aggression into the bodywork. This suits the Evo just fine, as it’s been beefed up in the performance department too. The heart of the matter is the new 2-liter turbo-charged four cylinder that uses an aluminum block for the first time in an Evo, which saves an important 26 lbs. even with the addition of features like dual variable valve timing and a timing chain. In addition to saving weight, the new engine makes even more power, a total of 295 horsepower. But that’s not all—aluminum also finds its way into the body of the Evo, and less weight and more power necessarily equals better performance. That formula is proven emphatically by the ability of the all-wheel drive Evo to scramble to 60 mph in just 5 seconds, and pull nearly a full lateral G on the skid pad. The overall impression the Evo leaves you with is that it could tackle any corner you can throw at it, and this is an impression borne out by the experience behind the wheel.

[singlepic id=16376 w=320 h=240 float=right]As the penultimate edition of the “R34” series Skyline GT-R, and in fact, as one of the last of the traditionally inline-six powered Skylines, the V-Spec II is destined to be a collectible. Let’s hope that this doesn’t mean that existing models are parked in garages and never driven, because driving is exactly what Nissan intended this GT-R to do. The V-Spec II (the “V” stands for “victory,” by the way) comes with all of the goodies that the original V-Spec had, but it’s even harder-edged thanks to increased stiffness and lighter weight (primarily due to a special carbon fiber hood, spotted at a distance by the small NACA duct). The RB26DETT engine will be familiar to Skyline fans, but only the very fanatical will know offhand that the ATTESA E-TS all-wheel drive system is actually the “Pro” version, with an active limited-slip differential that splits torque laterally if necessary. Externally, small “V-Spec II” badges and a large “bi-plane” rear wing differentiate this Skyline from lesser models. With well over 300 horsepower, the GT-R is not only quick, it’s very much so—particularly in poor traction situations where the all-wheel drive system comes into the fore.

This weeks’ full list of cars (along with the two cars above):