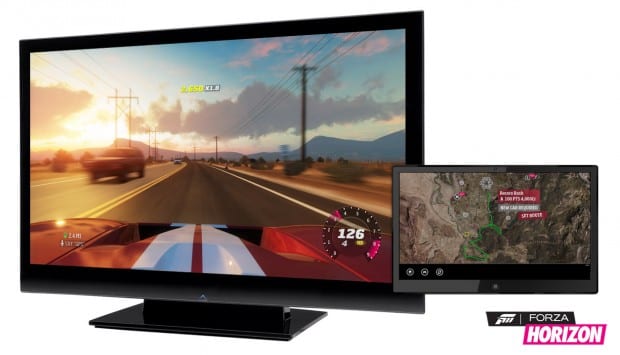 According to a press release from today, Forza Horizon now supports the new SmartGlass technology available on the Windows 8 platform, with other platforms being available shortly. This is landmark, as this is one of the first games to use the interactive screen which is very similar to Nintendo’s WiiU offering.

What does this functionality mean to you? In Forza, you could use your smartphone, PC or tablet device as a map interface instead of having to pause the game. This is especially attractive if you tend to play standard rather than automatic shifting, as the manual control scheme doesn’t have a dedicated map button (so you have to hit pause, then select Map).

Having reviewed the game, I noticed in the documentation that they highlighted SmartGlass, and I was looking forward to its release. In fact, several days ago the Xbox Companion app for Windows Phone 7x was upgraded to Xbox SmartGlass, so I had popped in Forza Horizon to see if the functionality was updated in-game : sadly it had not.  The press release seems to indicate that only Windows 8 (and presumably the Surface RT tablets) will be able to access this enhancement – who knows, perhaps the Windows Phone platform will also work – I might just be found speeding around Colorado while operating a cell phone … let’s just hope they don’t call the cops.