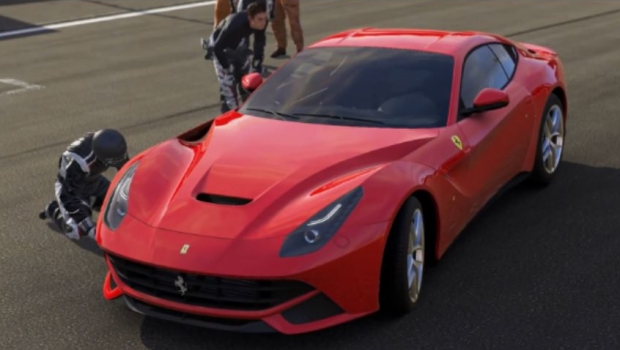 Turn 10 is upping their reveals – this week we have a total of 44 new cars making their way to Forza Motorsport 5 with five sitting on the showroom floor. A couple that stand out for me are the 1997 Ruf CTR2 (think Porsche 911 Turbo), The Judge (69 Pontiac GTO), and the 1963 Volkswagen Beetle. Heck, I made a ton of credits on my Herbie skin on Forza Horizon, though in Forza Motorsport 5 that system is changing.

They also recently announced car passes and monthly DLC. Looks like Forza 5 is carrying on the tradition of keeping things fresh. It’d be nice if they announced a track that may be a tribute to Rallisport Challenge ice racing – living in Winnipeg means it’s at least 30% of my driving experience!

The following details have been shamelessly ripped from Turn 10:

[singlepic id=17049 w=620 h=350 float=]
2013 Ariel Atom 500 V8
Everything about the Ariel Atom is amazing. Its shape is practically automotive euphoria by itself, and that’s before you get it on the track. To drive one is shocking. The new V8 version takes performance to unprecedented levels and keeps the Atom at the absolute pinnacle of ultimate track toys. Sure it’s street legal, but the Atom is at home at the track or even the drag strip. Ariel claims 0-60 acceleration to be 2.3 seconds. Few motorcycles can even match those numbers; it follows, since Ariel used to build some of the most loved British bikes in history. Here are just a few of the mind-blowing specs that make the Atom 500 what it is: a John Hartley-designed 500 horsepower Ariel 3.0 liter, weighing in at 198 pounds, a Sadev six-speed sequential transmission, Dymag magnesium wheels, combined with its exo-skeleton chassis with carbon fiber body panels and foils the Atom weighs in at a phenomenal 1,213 pounds. Most drivers won’t even be able to handle this kind of power-to-weight ratio right out of the box, but learning to reel it in will be a lot of fun.

[singlepic id=17048 w=620 h=350 float=]
2009 Honda S2000 CR
This rev-happy roadster has always been the life of the party among Honda lovers as well as those looking for a candidate for the occasional autocross or track day. The S2000 CR takes all that is good about the S2000 and then, following Colin Chapman’s rule of “adding lightness,” arrives 90 pounds lighter than the standard version. Adding some stickier rubber (wider in the rear), a lower ratio steering rack and stiffer springs, the CR is begging to be pushed hard into any turn that comes its way. Fighting gravity on the skid pad has always been a strong suit for the S2000, and now the CR brings even more downforce for high-speed corners with its revised body kit. The look it presents is functional, reducing the overall coefficient of lift significantly and giving the CR a racy look to match its intents of being a weekend track car. Limited production numbers make this S2000 a rare find on the road; thanks to Forza Motorsport 5, you can now say you drove one.

[singlepic id=17052 w=620 h=350 float=]
2014 Ford Fiesta ST
Ford has been achieving great success with its lineup for one reason in particular: it has been listening to car enthusiasts. The design of the Fiesta ST reflects the things car lovers want. The fact the Fiesta has seen outstanding success in rally racing hasn’t hurt either. Styling is aggressive and sporty, taking cues from racing, such as the high-mounted rear spoiler and a low center of gravity. The Fiesta is loads of fun to drive, thanks to its 197 horsepower eco-boost engine and electric power-assisted steering. Off the line, the Fiesta ST is more than peppy, it’s downright fast, and through corners the lack of understeer will inspire confidence. Steering is quick and responsive and despite being front-wheel drive its tail can be pushed out with a little help from a heavy foot. Take a few turns in the smaller of Ford’s hot hatches and you will agree Ford has been doing the right thing.

[singlepic id=17051 w=620 h=350 float=]
2013 Mazda MX-5 Miata
The Mazda MX-5 doesn’t have to be the most powerful roadster ever made to remain one of the best choices for spirited driving and all-out fun. It’s been almost a quarter of century since the Miata was introduced and other roadsters have come and gone while the Miata remains with very few changes overall. Fun can be found at any speed in a Miata and the handling will make any driver feel like they are one with their car. Steering is communicative and handling is intuitive. Power from the reliable 2.0 liter inline four-cylinder, while not immense at 167 HP, is ample to keep you stuck in your seat and grinning madly with an earful of its delicious exhaust note. As the saying goes: don’t fix it if it ain’t broken. Aside from a slight styling refresh, the MX-5 just keeps getting it right.

[singlepic id=17050 w=620 h=350 float=]
2013 Audi RS 7
If you need a car that will rocket the family and a weekend’s worth of gear from 0-60 MPH in less than four seconds the RS 7 Sportback is ready for the indulgence of your right foot. It’s a five-door hatchback, of the highest order. The RS 7’s twin-turbo V8 packs a punch that will tempt passing when others patiently wait for a better opportunity. More than 550 horsepower is ready to make any trip an exciting notion. Take the RS 7 out on the track and despite the fact it is no lightweight, handling is profound, delivering immense grip under the most rigorous cornering you can throw at it. Thank Audi’s race proven quattro all-wheel-drive system for that perfectly balanced traction. Among grand touring sedans the Audi is a handsome choice for even the most discerning enthusiast.

As always, we’ve included the showroom pics below in their 1920×1080 (wallpaper) resolution. Forza Motorsport 5 is exclusive to the Xbox One and will be available at the launch on November 22, 2013.