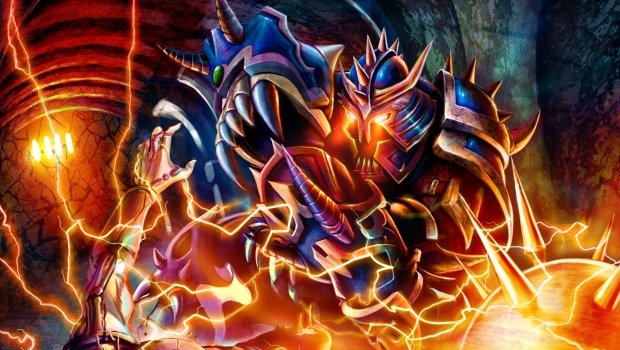 I have to say that I haven’t seen a game quite like SolForge.  It contains the deck-building of Magic, but cards level up as you play.  You aren’t limited by resources, only the number of cards you can play per turn.  The strategy level is high, but the gameplay is simple that anyone can pick it up and play.  Now Stone Blade Entertainment has released their first major expansion for SolForge, and there’s plenty to be excited about.

Stone Blade Entertainment, the company behind the award-winning board game and iOS app Ascension, has released its first major expansion for the SolForge digital collectible game, called Rise of the Forgeborn.

The expansion introduces one hundred new cards for players to collect, including four legendary Forgeborn cards, which are the first cards in the game that can reach Level 4. Also included in the new set are Allied creatures, whose powers players can unlock by playing certain faction combinations in their decks.

“New content is the lifeblood of any successful collectible game,” said Justin Gary, founder and CEO of Stone Blade Entertainment, “We’re excited for our players to experience our first large expansion set, and hope they allhave as much fun playing with the new cards as we had making them!”

The new update also introduces Card Forging, a way for players to cash in excess copies of cards they have collected for in game currency. The Card Forging system also allows players to purchase cards directly for this in-game currency, providing players with an additional tool to acquire cards for their collections.

In SolForge, players build and customize decks of cards to compete with other players online or against AI opponents.  The new update introduces twenty-four new cards to the available pool, as well as changes to a number of existing cards to give players new tools for their decks.  SolForge is free to play, and players can earn new cards to improve their decks through gameplay.

SolForge is a digital collectible game designed by Stone Blade Entertainment in a partnership with Richard Garfield, the creator of Magic: the Gathering.   SolForge is set in an original fantasy setting of a desolate world whose sun has gone dark.  In this frozen landscape, four factions struggle for dominance over the SolForge, a mystical spire that is the source of light, heat, and magic in the world.  Players take on the role of Forgeborn, those who control the magic of the SolForge, and battle against one another with fantastical creatures and powerful spells.

For more information, or to download SolForge, visit https://www.solforgegame.com.

While you can pay for card packs, you can play and win with what is available for free.  They also have an iPhone version as well as the iPad one now as well, so you can play on any iOS device.  Be sure to check out SolForge if you haven’t already.  You don’t have anything to lose.