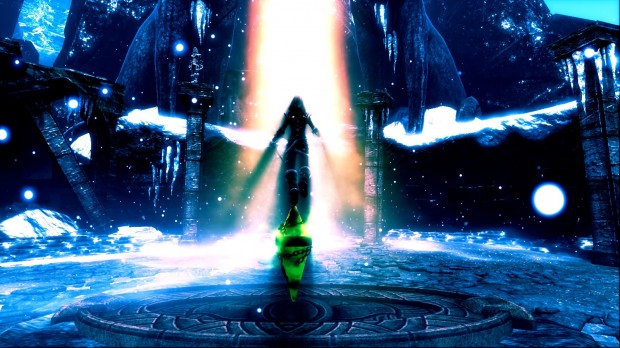 When I first had a chance to look at Forge back in January, I came away impressed by the core gameplay but disappointed with the shell around it. Mixing the skill-based strategy of a MOBA with the twitchy skill needed for an FPS, a match in Forge was a frenzied, frantic affair.  As good as the action was, the lack of features at launch was a real bring-down. There was no ranking system, essentially no matchmaking, and very little by way of social groupings like guilds or friend lists. Forge had a major update last week, and I decided I’d have a look over the weekend to see how its evolved since it first launched.

[singlepic id=11980 w=320 h=240 float=left]The first thing to mention has to be the addition of a new class: the Ravager. The Ravager has a pretty unique look—if you can imagine Verne Troyer wearing armor made of barbed-wire and wielding Kratos’s chain-swords, then you’re on the right track. Like the other classes, the Ravager fills a pretty specific role, dedicated to all-out attacks. I like the new class—it’s got a really crazy look to it, and it has some interesting mechanics for pulling enemies out of blobs. While it looks and feels cool, the Ravager seems a bit underpowered. Like the other melee classes the Ravager is easy to kite, meaning that you’re probably going to lose if you find yourself facing a ranged damage-dealer. However, Dark Vale are generally pretty good about addressing issues with balance, so this should iron itself out in the coming days and weeks.

I say “generally” and not “definitely” because—in my opinion, at least—Shamans are still really overpowered.  As if the ability to heal other players wasn’t enough, Shamans can heal themselves, making them surprisingly difficult to kill.. In Team Deathmatch, a half-decent Shaman can completely unhinge the match, giving one team an incredible advantage. If you’re can coordinate with your team mates, you can focus a shaman down, but without that communication you’ll have a really difficult time with it.

Another new feature to Forge is the addition of integrated voice chat. Unfortunately, this feature is mostly ignored, which is a real shame because effective communication could make matches incredibly fun. When I did find some other players willing to use chat our team got a big advantage from effective communication—allowing us to prioritize and focus fire effectively. I’m sure that more serious groups communicate using 3rd party tools like Mumble or TeamSpeak, but I didn’t find any of those groups.[singlepic id=11873 w=320 h=240 float=right]

In my review I expressed disappointment at the lack of any meaningful social features, like guilds or friendslists. Dark Vale has partially addressed this by integrating Steam right into Forge. If you want to play with friends, you can pull up your friendslist in game, pick some of your buddies who are logged into Steam, and dive into some matches. A nice feature is that if you’ve enjoyed playing with somebody while pugging (Public User Group—playing with randoms), you can right click their name in the post-match scoreboard to add them as a Steam friend. There are competitive Guilds in Forge, but there’s very little integration of them into the game itself. I would really have enjoyed a way to log into and access Guild info in the game, but the other social features have come a long way.

The free weekend on Steam meant that Forge had an influx of new players, which makes the noob experience vital. Luckily, Dark Vale have thrown out the useless tutorial Forge launched with and replaced it with a multi-stage class-by-class walk through of the game’s mechanics. Considering the involving ways abilities mix between and even within classes, Dark Vale have done a great job explaining how to use different abilities for each class. It’s a shame the Ravager didn’t have a tutorial of its own, but I’m sure it’s in the works.

The other biggest changes to Forge have to to with matchmaking. In my review, I complained that games would often be underfilled, or even empty. That problem seems to have been addressed with the addition of server browsing. Unlike back in January, you can now search for games to join, meaning you can go find the games instead of just hoping you get dropped into one. I’m not convinced the problem has been completely solved, though. For one thing, this was during a weekend in which the game was free on Steam, meaning you’ll have a lot of players just popping in to try the game out. How many of those will stick around remains to be seen. The other cause for concern was the despite the influx of players for the free weekend, I still found myself in 2v2 matches from time to time.

[singlepic id=11875 w=320 h=240 float=left]The addition of a ranking system goes a long way towards making the matches more evenly balanced. When I first played the game in January, I’d often find that I’d been put into a match with players who had been testing the game since pre-Alpha. Needless to say my team would get crushed. This time around it seemed like I was mostly matched with players who were at a comparable skill level. This isn’t to say that you won’t occasionally find matches are completely one sided, but the problem isn’t anywhere near as common as it was.

The biggest remaining problem with Forge is simply how few people play it. It’s a huge shame, as this is one of the best games nobody’s playing. In the four months since launch Dark Vale has refined Forge’s frenetic combat and added in some much-needed matchmakng and social features. In doing so they’ve made Forge into a really solid game. If you like PvP combat shooters like Team Fortress or skill based MOBAs like League of Legends, you really ought to give Forge a go—you’ll probably find something you like.