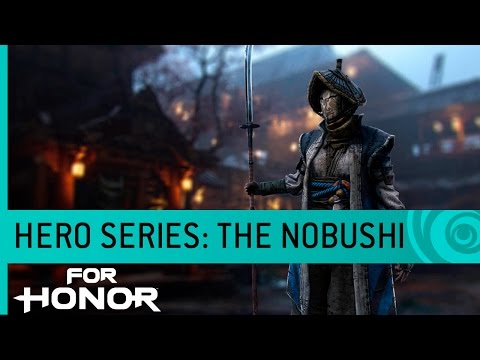 Today, Ubisoft revealed trailers for three classes—The Nobushi, The Valkyrie, and the Lawbringer—that will be available immediately when For Honor launches. Here they are:

The Nobushi are the defenders of the villages too far from the Imperial City for the army to reach. They are elegant fighters with a curious weapon. They have the lightest armor that allows them to move like the wind but cannot take a lot of damage. But don’t let their appearance fool you, they are one of the most effective fighters the Samurai have.

The Valkyries have made a deal with the gods. They will fight and earn glory so that those who can’t will be counted in the halls of Valhalla. They are scouts and trackers who use their spears and shields to deadly effect. They are chosen by the gods — hope you never encounter one on the battlefield.

The Lawbringers are the justice in Ashfeld. They enforce the laws and dispense punishment. Their armor is without equal. Their weapon is a grim reminder of the ultimate punishment for lawlessness. They will go wherever they are needed – pray that you are on the right side when they arrive.

For Honor is having a closed beta (sign-up here) from January 26-29. For Honor releases on February 14 for PC, Xbox One, and PS4.