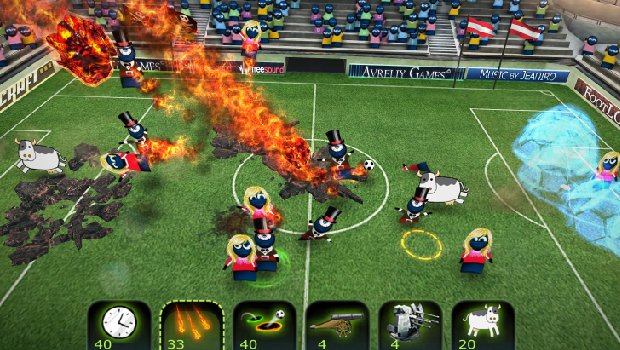 What do you get when you add on-the-fly placement of land mines, cannons and cows to a game of soccer? A more exciting game, that’s what! I’m pretty sure that’s the philosophy behind Steam Greenlight title FootLOL: Epic Fail League, and as someone who has never been enamored with soccer, I must admit the guys at Herocraft and Avreliy Games seem to have added a key missing ingredient to the game. FootLOL’s approach is simple: your team of soccer players face off against their opponents, and you lack direct control over them – but you can affect the course of the game indirectly by placing landmines under enemies, shields on allies, and a whole slew of additional offensive/defensive abilities that will be unlocked over the course of the game. It’s chaotic, it’s flashy, and it seems like quite a lot of fun. If the combination of soccer and incendiary devices sounds like a winner to you, check out the aforelinked Steam Greenlight page and consider giving this one your vote. For those of you who need a little more flash and animation to push you on this one, check out the trailer below.

By the way, at 43 seconds? Airborne bombing strafe run. I point this out because this made me smile nice and big when I saw it happen.