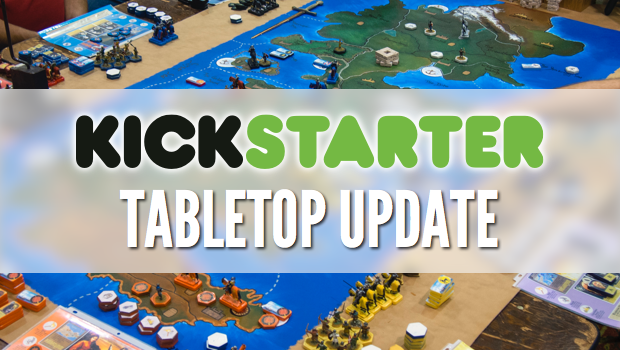 Hello! Welcome to Friday Tabletop Kickstarter Update! For info on what is going on here, check out this introduction. The Kickstarter machine is still rolling, and games keep on coming.

Stonemaier Games, the publishing and design house that brought us Euphoria and Viticulture, is back on Kickstarter looking to publish Between Two Cities. In this game players draft tiles into one of two cities they are building. One city is on their left, being built cooperatively with their left neighbor and one city to their right, teaming up with their other neighbor. If their previous track record is any indication of the future of Between Two Cities, the game will be solid with outstanding production.

My only reservation with the game is the end game scoring, each player’s score is equal to the value of their lowest valued city. The highest of these low scores being the winner. This means that if you play great, but one neighbor plays poorly, and the other also plays great, you will lose because of your poorly playing neighbor. Read the rules, and look at poor Matthew in the scoring example, he lost because of Ben’s lackluster efforts.

For those who think chess is too simple, here is your remedy: Sovereign Chess. Scattered out on the field are multicolored spaces. When you control one of these spaces, you also control that color army that will start moving in from the side. No longer do you have to worry about one army to fight, but ten additional potential foes. If nothing else, the game looks awesome set up on a table. Go check out the campaign page.

Entering the ring with their first game, Happy Mitten Games is trying to get funding for Aether Magic, a game about fantastical mages fighting for superiority. Players will transform their resources into elements that are used to cast various spells. With plenty of good looking art, this is one to keep an eye on.

Continuing on in the world of Mad City first introduced in the Don’t Rest Your Head RPG, Evil Hat Productions is running a campaign for Don’t Turn Your Back. In this game players are trying to survive the various perils of the crazy horror infested world they inhabit. What is interesting about Don’t Turn Your Back is that it is worker placement, where cards from a ‘deck building style’ deck are used as your workers. If horror fantasy is your thing, this may be a game for you.

No more trading in the Mediterranean, Floating Market changes the scenery to Thailand and the famous market of Damnoen Saduak. Over the course of the game, players will be trying to collect all of the different fruit types using a worker placement mechanism paired with dice. I don’t know how I feel about Eagle-Gryphon’s forced scarcity model, but apparently now is the only time to get your hands on this game.