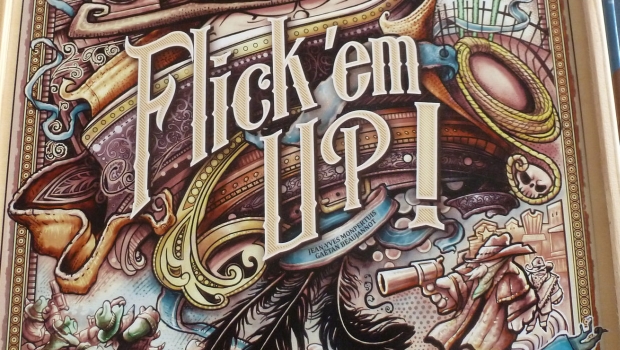 One of the surprise hits of the F2Z lineup is Pretzel Games’ Flick ’em Up!  However, due to the great number of wood pieces it seemed to be an expensive investment for what is basically a game of flicking disks.  Now it will be getting a “Wider Audience” edition.

F2Z Entertainment, proud publisher of the brands Filosofia, Z-Man Games, Pretzel Games and Plaid Hat Games, is very excited to officially announce that Pretzel Games’ Flick’em Up! is getting a “Wider Audience” edition.

In fact, our very first dexterity game released last year was so well received; and we wanted to make it available to even more gamers and families across the world. Although, to make this possible, we needed the help of as many partners as we could assemble. Since so many came forward, your favorite flicking game will soon be published in 14 languages which are English, German, French, Dutch, Hungarian, Polish, Italian, Spanish, Portuguese, Chinese, Finnish, Swedish, Danish and Norwegian.

This Wider Audience edition will be published under the Z-Man Games label, and presented in redesigned multi-language boxes for the incredibly low price of $34.99 (US)! The release is scheduled for July 2016, and more details will come shortly.

The fact that it will be published in multiple countries with easier to produce components should really broaden the number of people who have Flick ’em Up!  It’s scheduled to be released in a couple of months, so now you’ll have two great ways to get the game.