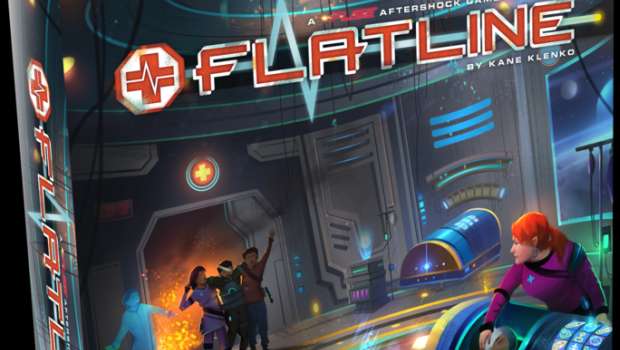 FUSE was one of the biggest surprises for me last year.  (Be sure to check out my review.)  I admit that I wouldn’t find it exciting, but the real-time nature of the game makes it fast and frantic.  Now Renegade Game Studios has announced that they are creating an entire FUSE universe, and the next game in this series will be called FLATLINE.

Renegade Game Studios™, the premier publisher of original games will release FLATLINE, a stand-alone game based in the FUSE universe.

FLATLINE is a cooperative dice game set in the FUSE universe. Players must roll their dice and work to combine them with other players in order to properly treat arriving patients. Every round, players are racing against a one-minute timer and must deal with the needs of each wounded crew members, as well as other emergencies within the ER. Time is running out!

The flames are subsiding, the smoke is clearing, but your work is just beginning. You and your crew survived FUSE, but there is significant damage to your ship, there are injuries among your crew members, and the life support systems are failing. As the ship’s Medics, you must work together to treat the injured crew, while dealing with other emergencies that are being brought in at an unrelenting pace. You must work together, against the clock and against all odds, to treat all your patients before time runs out!

“FLATLINE really encourages players to work as a team,”  says Renegade President Scott Gaeta.  “Everyone will be racing against a clock each round and they must work together and communicate clearly if they want to save all the patients. It’s intense but very satisfying. ”

Look for FLATLINE at friendly local game stores and online Spring 2017. FLATLINE takes about 45 minutes to play and is for 1-5 players ages 13+. MSRP will be $50. The box contains the following components:

I have a feeling that you don’t want to be wearing a red shirt in the FUSE universe.  Get ready to save your ship this spring.