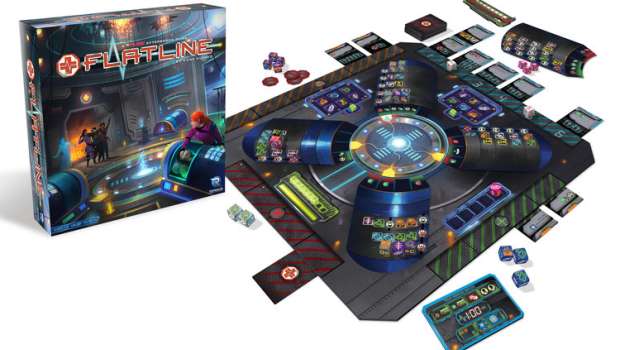 Fuse was a huge surprise for me last year, as evidenced by my review.  The fact that it was a real-time game made it much more frantic than if it had been turn-based where people could take their time.  After a short delay the second game in this universe will be released, Flatline: A Fuse Aftershock Game.

Renegade Game Studios is pleased to announce that FLATLINE, the latest game by Kane Klenko, will be available in hobby stores worldwide on May 31st!

FLATLINE is a cooperative dice game set in the FUSE universe. Players must roll their dice and work to combine them with other players in order to properly treat arriving patients. Every round, players are racing against a one-minute timer and must deal with the needs of each wounded crew members, as well as other emergencies within the ER. Time is running out!

Look for this and more great games at your friendly local retailer on May 31st!

I haven’t seen much about the game, but it sounds like this will be a longer, meatier experience.  I’m looking forward to seeing what comes next from Kane Klenko after this and Flipships are released.