Warner Bros. Interactive Entertainment and Monolith Productions have released the first official Middle-earth: Shadow of Mordor gameplay today, along with three brand-new screenshots. The trailer shows the “Nemesis System” – the new next-gen system that tracks all of the choices made by players in the game, the relationships they cultivate, and how the game will react to those choices.  Before we check out the screenshots and video, here’s a bit about the upcoming title:

Middle-earth: Shadow of Mordor delivers a dynamic game environment where the player orchestrates their personal plan of vengeance as they bend Mordor to their will. The game begins on the night of Sauron’s return to Mordor, as his Black Captains brutally execute the Rangers of the Black Gate. Players become Talion, a ranger who loses his family and everything he holds dear, only to be returned from death by a mysterious Spirit of vengeance. As Talion’s personal vendetta unfolds, players uncover the mystery of the Spirit that compels him, discover the origin of the Rings of Power and confront the ultimate nemesis.

A new story set between the events of The Hobbit and The Lord of the Rings, Middle-earth: Shadow of Mordor delivers a vibrant next-gen game world through its Nemesis System. Every enemy players face is a unique individual, differentiated by their personality, strengths and weaknesses. These enemies are shaped by their encounters with the player to create personal archenemies who are unique to every gameplay session. Players must outthink each distinctively different enemy they encounter to infiltrate the ranks and dominate within the dynamic world that remembers and adapts to their actions and choices.

The single-player RPG is coming to Xbox 360, Xbox One, PlayStation 3, PlayStation 4, and PC this Fall.  This trailer looks amazing – I’m looking forward to an (anticipated) M-rated take on Middle-earth. 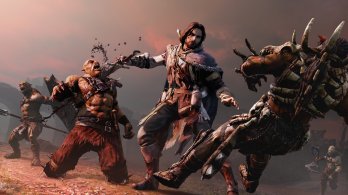 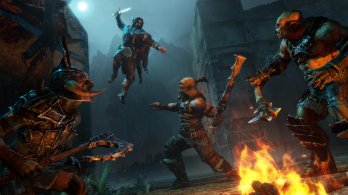 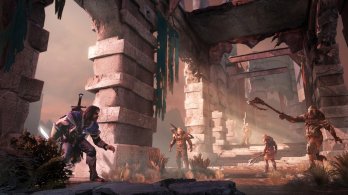