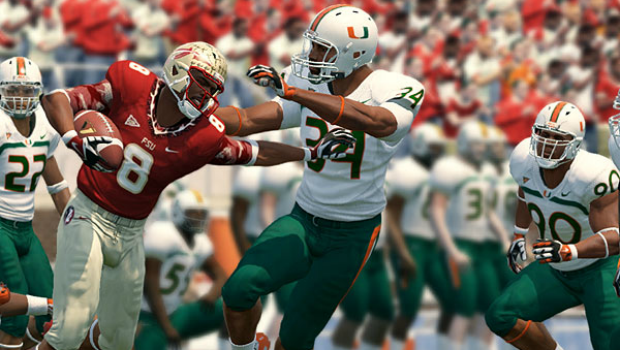 The first details about the upcoming changes to EA’s NCAA Football 14 have been released, including a strong emphasis on the popular option formation and the introduction of the Infinity Engine to the franchise, according to ESPN’s Jon Robinson.

With the sudden resurgence of the option formation’s popularity, EA has focused attention to improving the fluidity and understandability of the play. Numbers above key defenders will inform the player of how to read a defense, and a remapping of buttons allows for quicker option passing and handoffs. This is a fantastic proposed improvement, as the option play is too complicated and nuanced for the standard football fan to really understand. With 30 new formations and over 350 new plays, there will be plenty of interesting ways to implement this tactic in-game.

“We’ve gone crazy overboard revamping the option game this year,” said Larry Richart, NCAA Football 14’s central game-play designer. “There are 31 different option types in our game now, which include all the different veer options, shotgun full triple options, shovel options, the Pistol … any type of option play you can think of.”

In addition, blocking schemes have been improved so that players will block appropriate players either at the line or down field. This will likely improve successes on option passes to the flats or on screens, something that has long been broken even in standard formations.

Also new to NCAA is the Infinity Engine, a physics engine introduced in last year’s Madden NFL 13 to rave reviews. Rather than giving NCAA fans a dusted off version of last year’s Madden engine, EA has improved on many of the animations. Ball-carriers will deliver powerful stiff-arms to specific parts of the defenders body, and the defender will react anatomically to the hit. Route running and pathways have been improved, as well as impact tackles.

“This is a much more mature version than what you played in ‘Madden,’” Richart said. “But the big thing is, it’s physics you can play.”

NCAA Football 14 will be shipped July 9. Fans should continue checking the NCAA Football Facebook page in the coming weeks for more information on new features, exclusive assets, and more.