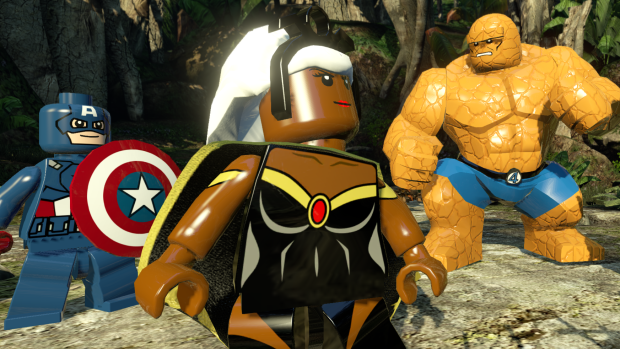 LEGO is always popular with the kids – and now, on the launch day of the Xbox One, you can play it either by downloading it or walking into a store. The advantage to the download method is you can start playing it before the download even finishes. Plus, it’s pretty cold outside, and assuming you’ve already picked up your pre-order, do you really want to go into the madhouse that is launch-day retail?

LEGO Marvel Super Heroes features an entirely original story that encapsulates the entire Marvel Universe. Players take control of over 100 unique Marvel characters like Iron Man, Spider-Man, the Hulk, Captain America, Wolverine and more as they unite to stop Loki and a host of other Marvel villains from assembling a super-weapon capable of destroying the world. Players will chase down Cosmic Bricks as they travel across LEGO Manhattan and visit key locations from the Marvel Universe, such as Stark Tower, Asteroid M, a Hydra base and the X-Mansion.

I also noticed they already have some DLC extras in the online store, where you can play as a bunch of Asgardians, or an eclectic collection of heroes such as the symbiote suited Spiderman. You might be on the fence about it, but our own Sam Vary was sure that the PC version was worth playing – so go ahead, give into your secret love of little pieces and Marvel characters – LEGO Marvel Superheroes is available on Xbox One, Playstation 4, Wii U, Xbox 360, Playstation 3, and of course, on PC.

A mobile version, LEGO Marvel Super Heroes: Universe in Peril can be found for the PS Vita and Nintendo 3DS.