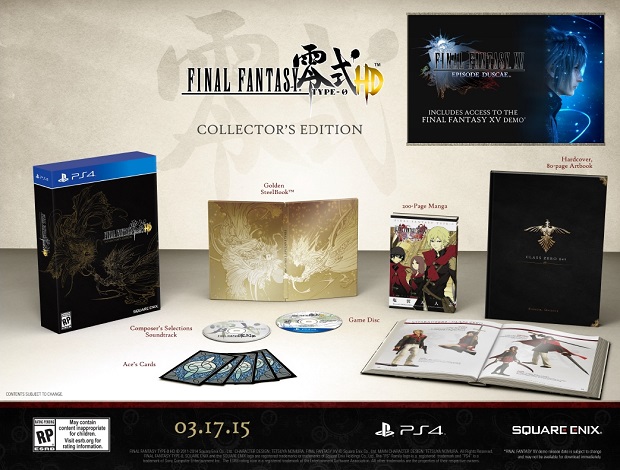 Square-Enix has revealed the collector’s edition for Final Fantasy Type-0.

Through a post on the PlayStation Blog, the company revealed the $99.99 collector’s edition will come with a golden steelbook case for the game, a soundtrack CD, duplicates of Ace’s in-game cards, an 80-page hardcover artbook, and a 200-page artbook.

Elsewhere in the post, it was confirmed that the Final Fantasy XV demo that will come with the game will only be available in the game’s first shipment. “Day One” editions of Type-0 will contain the roughly one-hour-long demo for Final Fantasy XV, while later shipments of the game won’t contain the demo at all. Square-Enix confirms it has no plans to release the demo standalone through the PlayStation Store or Xbox Live Marketplace, meaning that if you want to play the demo, you need to be one of the first people buying Final Fantasy Type-0.

Final Fantasy Type-0 is coming to PlayStation 4 and Xbox One on March 17th in North America, March 19th in Japan and March 20th in the PAL region. A recent listing for the game reveals that it may be coming to PC sometime in the future. Despite coming to current-gen consoles, Type-0 originally was released on the PlayStation Portable, and has since received a significant visual update.