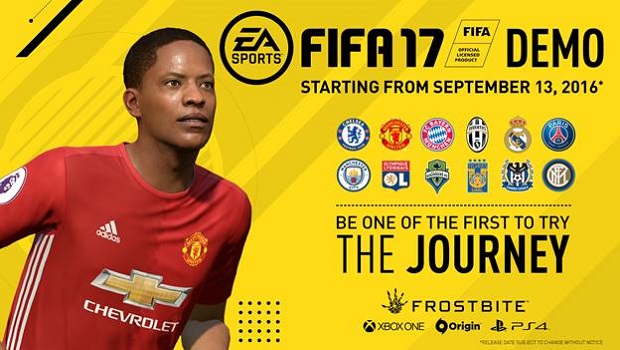 EA have finally released the demo for the next entry in their FIFA franchise, FIFA 17. The demo is playable on PS3, PS4, Xbox 360, and Xbox One. The demo showcases a number of new features in the new game. These include a short snippet of the new story driven game mode “The Journey,” and 12 teams to play in kickoff mode to try out the new gameplay mechanics of FIFA 17.

The new “The Journey” game mode in the demo will only give you a taste of the experience as Alex Hunter by automatically placing you into the Manchester United dressing room. However, in the full game you will be given the option of choosing between all 20 English Premier League teams.

While you wait for the Champions League to kickoff, why not download the FIFA 17 demo and give this years game a try. Maybe Manchester United fans can finally have the satisfaction of beating City.