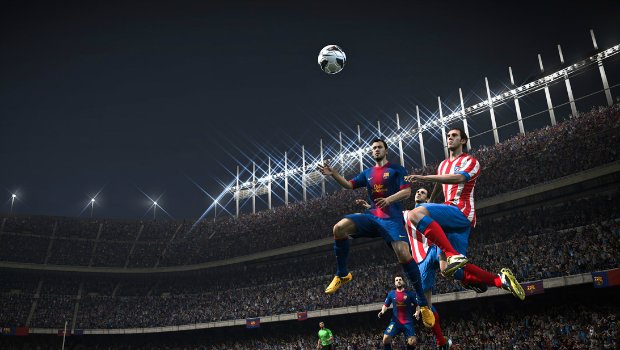 FIFA 14’s newest gameplay trailer showcases some of the graphical power of next-generation consoles, displaying how stadiums will truly come to life as Living Worlds.  The video shows how the atmosphere of football matches will be captured in the next-gen, with dramatic broadcast-inspired fly-overs, emotional pre-match ceremonies and true living and breathing sidelines.

The visuals in the fly-overs are stunning.  The stadiums look detailed and clean, captured in the daytime of in the fluorescent glow of a nighttime match.  The spectators are in full 3D (rather than just a portion of them) and chant, sing, and boo with a stirring authenticity.  The possibilities for next-gen gaming are obviously quite vast, but to see something sports gamers have always seen (flyovers, spectators, stadium ambiance and the like) in such dramatically enhanced ways is kind of an eye opener.

EA SPORTS FIFA 14 will release in North America on September 24 and worldwide on September 27.  The game will also be available on Xbox One and the PlayStation 4 later this year.  For more information on Living Worlds, visit the FIFA 14 blog or EA SPORTS IGNITE.