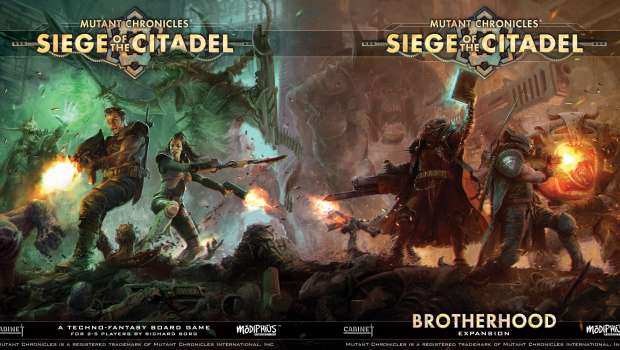 While Modiphius isn’t a well-known publisher in the US, they are making waves.  Their Mutant Chronicles and Achtung! Cthulhu RPGs have gathered quite a following though.  They made huge waves with their Siege of the Citadel Kickstarter.  Now they have entered a partnership with Fantasy Flight Games to co-publish Siege of the Citadel.

In a joint statement issued by Fredrik Malmberg, president and CEO of Cabinet Entertainment and Chris Birch, publishing director of Modiphius Entertainment, “FFG’s global reach is unsurpassed in the hobby game industry and their expertise allows us the opportunity to focus on the game‘s design and development. We‘re thrilled to be working with them to bring Mutant Chronicles: Siege of the Citadel to friendly local game shops everywhere.”

Siege of the Citadel, originally designed by Richard Borg and published by Target Games and Pressman Toys in the 1990s, was one of the first games of its kind to offer character development and the unique rotating Dark Legion player, among other groundbreaking ideas. Conceived by Sweden‘s gaming powerhouse Target Games, Siege of the Citadelwas advertised on television in the US and hundreds of gamers still own much loved copies across the world. This new edition reboots the classic game with balanced and updated rules, 40 new sculpted minis, new double-sided tiles, new creatures, and an A-List design team of Richard Borg, Eric M. Lang and Kevin Wilson.