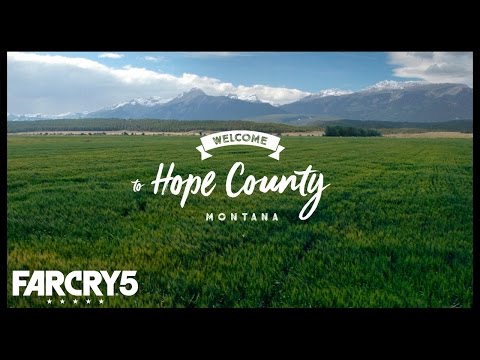 After several rumors, reports, and earning call chatter, Ubisoft has finally hinted at Far Cry 5’s setting with a teaser trailer, and as reports indicated, it appears to be taking place in Montana.

The trailer opens with the sound of screaming and a shot of a flock of birds flying over an open prairie. Several other prairie-set shots are seen, one with an unidentified long-haired man running across a field of tall grass. Later, a drone-shot flies past an early 20th century church as the bell tolls. As the camera gets closer, you can see that a man is striking the church bell with another person’s head. (It should be noted that the head is intact with the rest of the body, which would almost go without saying if it wasn’t Far Cry.)

Check out the teaser trailer for Far Cry 5 below.

Last week, Ubisoft held an earnings call to discuss its plans for the next two years, specifically divulging its lineup of games for the fiscal year 2018. Included in the lineup was Far Cry 5, The Crew 2, South Park: The Fractured But Whole, and the next Assassin’s Creed game (which is reported to be set in Egypt and will be called Assassin’s Creed: Origins). Prior to the earnings call, Jason Schreier reported that the next Far Cry 5 game would be set in Montana.

These reports were in response to a story printed by a local Montana outlet reporting a film crew working by an old church on a Montana prairie. The film crew was headed by producer Jeff Guillot, who told the press that they were filming a live-action ad for a “sequel to an existing global franchise.”

No official word yet on a release date, but Guillot did say that the game they were shooting the ad for would be released later this year. Stay tuned for the inevitable E3 announcement.