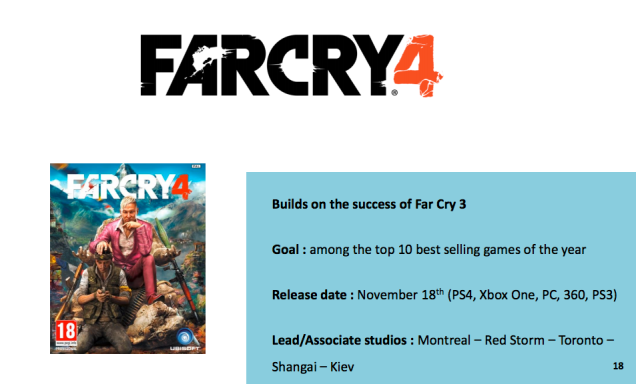 Kotaku is reporting that Ubisoft has confirmed the release of Far Cry 4 for this November during a financial presentation.

Ubisoft has released a brief synopsis for the game that reads as follows:

In Far Cry 4, players find themselves in Kyrat, a breathtaking, perilous and wild region of the Himalayas struggling under the regime of a despotic self-appointed king. Using a vast array of weapons, vehicles and animals, players will write their own story across an exotic open-world landscape.

Dan Hay, the game’s executive producer had this to say about the company’s mindset in developing the first-person shooter,

“Following the success of Far Cry 3, we wanted to take the franchise to the next level and create a game that will surprise players and exceed fans’ expectations,” said Hay. “Given the unique setting, we feel Far Cry 4 will stand out as a top first-person shooter and we’re eager to reveal more about the game in the coming months.”

Far Cry 4 will be released on November 18th.