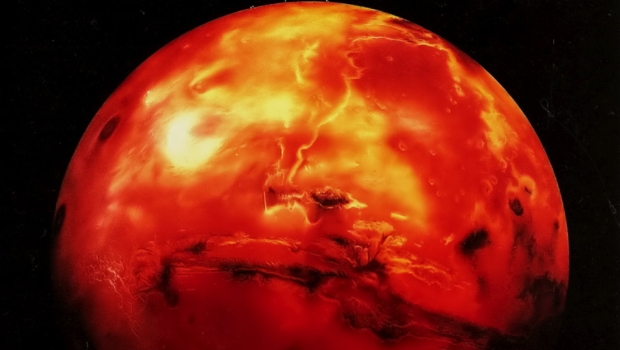 Fantasy Flight has had great success with reprinting games.  From DungeonQuest to Fortress America to Nexus Ops, the reprints have been added new components and rules while still paying homage to the original content.  Today they have announced that they are reprinting a game that’s been out of print for a while, Mission: Red Planet.

Highly acclaimed when it was first released in 2005, in Mission: Red Planet players take control of mining corporations competing to occupy Mars and harvest its invaluable, newly discovered natural resources. Players launch their astronauts into space, station them in the most profitable zones of the planet, and mine for minerals and ice, all the while cunningly undermining their competition. The game unites a German-style area control mechanic with hand management and simultaneous placement, creating suspenseful and intense player vs. player interactions.

This edition maintains the core mechanics of this fast-paced game while incorporating updates by the original designers. Astronauts can land in a new zone, the moon Phobos, and the Soldier can now convey astronauts from Phobos to anywhere on Mars. Missions and Discoveries have been fine-tuned, and new Action Cards join the Event deck. The game can now handle six players, with rules for a two-player variant also included for the first time. The Victorian steampunk aesthetic has been refreshed with all-new graphic design for a more contemporary look.

Mission: Red Planet is designed for two to six players, suitable for ages 13 and older, and takes approximately 45– 90 minutes to play. It is currently scheduled to be available in the third quarter of this year.

I haven’t had the opportunity to play Mission: Red Planet yet, so I’m really happy to see FFG is reprinting it.  Since it was designed by Bruno Faidutti and Bruno Cathala, I’m sure it’s a high quality title.  It’s going to be available in the third quarter, I wouldn’t be too surprised if we see this at GenCon.