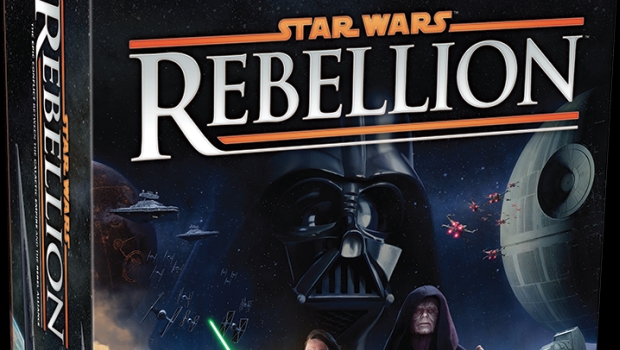 You might think that Fantasy Flight would be content to rest on the laurels of their current Star Wars lineup.  With the X-Wing Miniatures game, Armada, Star Wars LCG, Imperial Assault, and a few RPG offerings, they have plenty of games using the license.  However, they announced that they are bringing a new game titled Rebellion in 2016.

Today Fantasy Flight Games is proud to announce the upcoming release of Star WarsTM: Rebellion, a board game that aims to capture the full scope of the classic Star Wars trilogy.

In Rebellion, two to four players control the entire Galactic Empire or the fledgling Rebel Alliance. Games span multiple star systems. Planets join the Rebellion only to be overrun by the Empire and subjugated. Imperial officers capture Rebel spies and interrogate them for valuable information. A hotshot Rebel pilot may land a one-in-a-million shot against the Death Star and destroy it. Rebellion is sweeping, but also remains intensely heroic, cinematic, and personal. Success depends upon the strength of a player’s starships, vehicles, and troops, and above all on the individual efforts of iconic characters including Leia Organa, Luke Skywalker, Grand Moff Tarkin, and Emperor Palpatine.

The fate of the entire galaxy is at stake in Rebellion, and that galaxy has a very real physical presence on the table. Two game boards join together to depict thirty-two of the Star Wars galaxy’s most notable star systems and over 150 miniatures representing X-wings, Y-wings, TIE fighters, AT-ATs, Star Destroyers —even the Death Star in two different stages of completion.

“This is the Star Wars game I have always wanted to play, but couldn’t because it didn’t exist until now,” says Board Game Manager Steve Kimball. “It has been a privilege developing this game alongside Game Designer Corey Konieczka. Rebellion’s brand new, asymmetrical system offers deeply thematic gameplay, and we are excited to have players experience its rich, emergent narrative.”

Star Wars: Rebellion is scheduled to become available in the first quarter of 2016.

That’s a ton of miniatures in the game, and Corey Konieczka and Steve Kimball are experienced designers.  It sounds like this is the board game equivalent of playing with a toybox full of Star Wars toys.  Hopefully we’ll see some new Star Wars ships in the box since it is releasing after The Force Awakens is released in theaters.