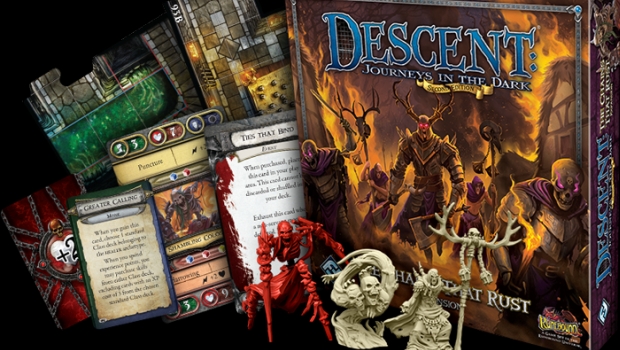 While the original Descent was popular, the Second Edition has proved even more popular.  While six boxed expansions have already been released for the game, with several more hero, monster, and lieutenant packs, Fantasy Flight isn’t ready to retire the game.  A new big box expansion called The Chains The Rust has been announced.

Fantasy Flight Games is proud to announce The Chains That Rust, a new expansion for Descent: Journeys in the Dark!

Your journey thus far has taken you deep into the Mistlands and the domain of Waiqar the Undying. In this land of shifting mists, uncertain footing, and terrifying undead, you are certain of little. The heroes that you’ve fought alongside for years seem suddenly alien and unknowable. Spirits loom up out of the fog and vanish moments before they touch you. Even the air you breathe seems to be worming its way inside you, tainting your blood and binding you to the Mistlands with indelible bonds. More and more, you are sure of only one thing: you must find a way to escape.

The heroes’ adventures through the Mistlands continue with The Chains That Rust, a new Descent expansion that pits your might against ever more deadly dangers. Within this expansion, you’ll discover an entirely new one-act campaign that can be played on its own or as a sequel to the campaign included in Mists of Bilehall. New Tainted cards and a new Overlord class give the overlord player new tools, even as eight plastic figures swell his armies with new monsters. Finally, you can stretch beyond your hero’s traditional Class decks for the first time with the addition of hybrid classes!

The addition of hybrid classes should breathe life into the game, creating unique characters for you to try during the campaign.  As always, the figures look great, and some new powers for the Overlord look menacing.  It looks like it will be released during the third quarter of this year, which probably means around GenCon.  You can find more information about the expansion here.