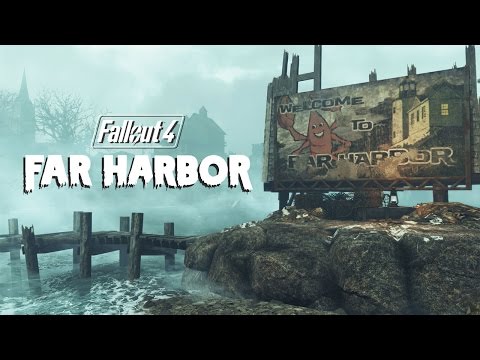 Bethesda has released a new video ahead of Fallout 4’s third DLC pack, “Far Harbor”, which is available for download May 19th.  The new video explores the look and feel of the new island world, and gives viewers a nice glimpse at the upcoming setting for the latest Fallout adventure.  Far Harbor features the largest landmass for an add-on that Bethesda Game Studios has ever created, filled with new faction quests, settlements, lethal creatures and dungeons.

In Far Harbor, a new case from Valentine’s Detective Agency leads you on a search for a young woman and a secret colony of synths. Travel off the coast of Maine to the mysterious island of Far Harbor, where higher levels of radiation have created a more feral world. Navigate through the growing conflict between the synths, the Children of Atom, and the local townspeople. Will you work towards bringing peace to Far Harbor, and at what cost?

The glimpse of the island shows us the extent of the destruction even on a remote target from the radiation of atomic destruction, and the expansion is promising to be a very dangerous, challenging world for any Fallout fan.  “It’s not like walking around the Commonwealth and maybe encountering some pockets of radiation,” warns Lead Producer Phil Nelson. “The island is radiation.”

Watch the video below, and For more information visit www.fallout4.com.