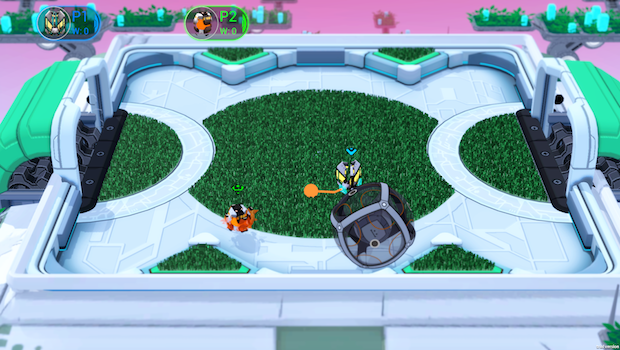 As we detailed in our recent write-up on the game, Blade Ballet looks like a promising first outing from new studio DreamSail Games. The studio has passed along some exclusive screens from their upcoming title, showing off the new soccer arena that Blade Ballet’s colorful bots will be able to square off in.

These screens show an arena called Turbo Club, with a massive cube in the center and two goals on either side, a unique mechanic for the arena that gives a power-up to any player that can manage to score a goal. The arena was available in our demo at PAX, and it was a highlight, with players competing to knock the ball in while also avoiding the many knives, lances, and maces of other bots.

Also shown are some drones that will dot the outside of another arena, Aero Meadow. Whether they’ll affect the arena in any way is unclear, but they are small and adorable.

Blade Ballet is due for PlayStation 4 and PC sometime this year.