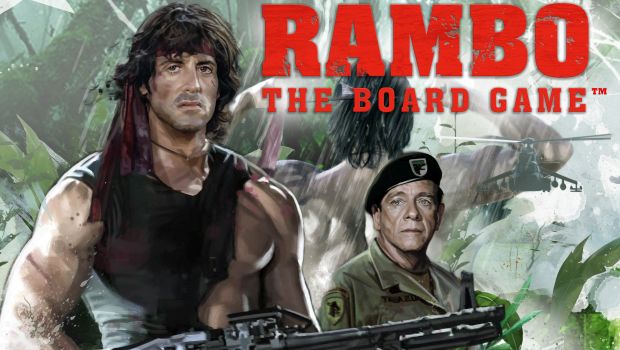 Sylvester Stallone has a long and storied career with several iconic characters.  He’s probably most well known for Rocky Balboa and John Rambo.  While Rocky is living on in the Creed movies, Rambo hasn’t seen action since a 2008 movie.  He’ll be back in action soon though with the upcoming Rambo: The Board Game coming from Everything Epic Games.

About “Rambo: The Board Game”

“Rambo: The Board Game” has been in development since May 2017 and is currently in beta testing getting ready for crowdfunding. The game is being designed by an Epic team including Chris Batarlis (Big Trouble in Little China the Game & Secrets of the Lost Tomb) and Samuel Bailey (Star Wars Imperial Assault, Forbidden Stars, Talisman,  & Elder Sign). The designers have been huge fans of the film series since the 80’s and are passionately making a game that will do this fan favorite justice. It’s not just a “pasted on theme with movie stills”: It’s a highly thematic, cooperative, and tactical miniatures mission-based campaign game that allows 1-4 players to experience the events they remember from the films as well as embark on new, never before seen missions.

The game provides sealed “self-expanding/legacy-like” Operation Envelopes which gradually expand the game as each mission completes. Each mission tells a story and takes the players on a unique adventure to various locations to save POW’s, escape a military prison, raid a jungle encampment, defend a secret air base, or survive a treacherous jungle and much more! Missions unlock new gear and tactics cards to help players customize their experience and allow for high replayability and great tactical strategy. Taking actions and engaging in combat is done with a card-based system, the player is in control, and every choice may be life or death.

Players choose from an iconic variety of special forces characters, each with highly detailed miniatures, including, of course, John Rambo, Col. Trautman, members of Baker Team, and other companions that Rambo teamed up with over the years. Each hero has unique abilities and customization options that make them valuable during missions.

You control how to approach the mission: Do you go in guns blazing? Or do you take a more stealthy approach? Perhaps you set a trap for the enemy? It’s up to you to decide and lead Rambo and his team to victory!

The Pre-orders on Kickstarter will be available in January 2018 with very special stretch goals and backer exclusives (Like Chopper and Tank Minis and Unique Expansion Packs!).

It sounds like the possibility exists to play this in a stealth style or running and gunning.  Look for the Kickstarter early next year.