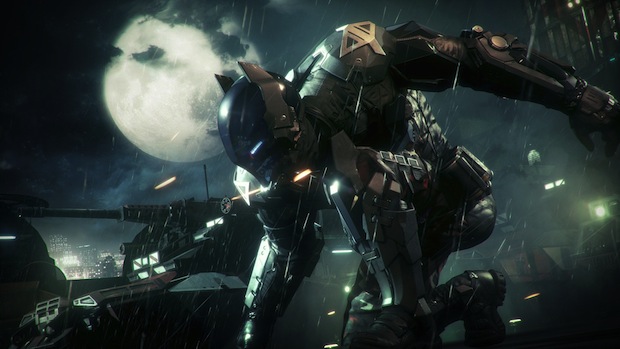 Batman: Arkham Knight is the first game in the series to receive an M rating from the ESRB, and the company has posted the game’s rating description up, giving some insight into why the game is the first to receive a high content rating.

The rating description reveals that Arkham Knight will contain scenes depicting torture, and more explicit profanity than has previously been heard in the series. The entire description reads as follows:

This is an action-adventure game in which players primarily assume the role of Batman as he battles several villains spreading chaos across Gotham City. Players traverse a variety of locations around Gotham while battling thugs, examining crime scenes, and occasionally rescuing hostages. Players engage in melee-style combat using punches, kicks, and gadgets (e.g., batarangs, explosives). Enemies cry out in pain when struck, and some takedowns are highlighted by brief slow-motion effects and loud impact sounds. Some sequences allow players to use tank-like vehicles with machine gun turrets and rockets to shoot enemies; a vehicle’s wheels are also used to torture an enemy in one sequence. Cutscenes depict characters getting shot (on and off camera) while restrained or unarmed. Large bloodstains/pools of blood appear in crime scenes and in the aftermath of violent acts; one room depicts a person torturing a character on a bloody operating table. During the course of the game, players can shoot unarmed characters and a hostage. Neon signs in a red-light district read “live nude girls” and “XXX.” The words “b*tch,” “gobsh*te,” and “a*s” appear in the dialogue.

Arkham Knight is coming to PC, PlayStation 4, and Xbox One on June 2nd, but we may already know how it ends due to a potentially massive spoiler found in the game’s collector’s edition.

For more on Arkham Knight, check out our preview from last year’s E3.