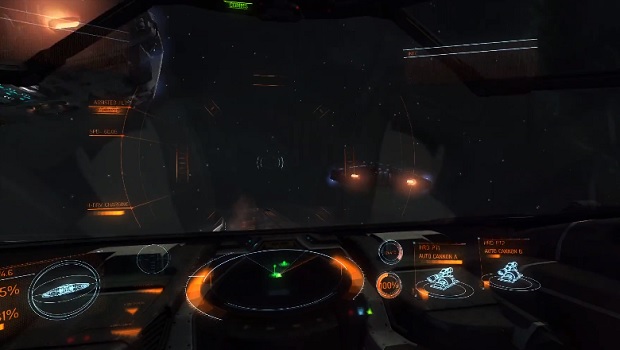 It’s not *exactly* true that the space-combat sim is dead, but it isn’t too far wrong, either. Sure, we’ve seen a few new franchises in the past decade, but the X series never had the same cache of a Wing Commander or Freelancer. It seems like the draught is ending, though: over the next year or so we’re going to be seeing a few classic names bringing the genre back to PC gamers. And if what I saw of Elite: Dangerous is any indication, we’re in for a hell of a ride.

Elite was one of the classic space-sim franchises, originally designed all the way back in the mid 1980s. Using nothing but 3D wireframe graphics, Dave Braben and co. essentially codified the “space trading” subgenre. In place of a classic mission structure, Elite allowed players to traverse an entire procedurally generated galaxy with few restrictictions.

After a successful Kickstarter program, the Elite series is back with Elite: Dangerous. It’s been almost two full decades since the previous entry in the series, and its clear Braben is planning on making the most of the the time. Simply put, I haven’t been this excited about a game since…I honestly couldn’t tell you when.

The first thing that hits you when you sit down to play Elite: Dangerous is the sheer spectacle of it all. The cockpit’s HUD is a seemingly unintelligible collection of light and color. Reticles appear and disappear at the press of a button. Engage your engines and meters start flying by. Increase your speed a bit more, and you start to see particle trails whizzing past your cockpit. It was overwhelming at first, but it all comes together after a just a few minutes of flight.

Plug in an Oculus Rift, though, and Elite quickly becomes amazing.  How many times have you wished you could look about the interior of your ship while playing a space-combat sim? It was one of the things I always wanted out of the genre, and now that I’ve tried it, I don’t ever want to go back. Tracking targets by eye feels incredible–there’s almost no other way to describe it. During the demo, I was using one of the original Rifts, and the low resolution did lead to some very ugly graphics–a real problem when trying to read Elite’s busy HUD–but Braben assured me that the everything looks much better on Oculus’s Crystal Cove demo (we’ll have news on that device friday!)

Piloting your ship is easy enough, but Elite works best because it forces you to pay attention to the mundane details. You can’t just say “Go to Station” and hope everything works out–you’ve got to manually navigate the station’s gate and even find your way to your designated landing pad. When you’re ready to leave, it’s up to you to launch your ship then navigate out into deep space. Serious attention to detail is required for takeoff or landing–if you overshoot your landing pad, you could smash into a control tower. It sounds boring, but trying to hit the tiny, rotating entry port of a huge station is actually a real test of your ability to control your ship.

Of course, flying a ship is not the same as fighting. Combat in Elite: Dangerous is a real challenge–enemies are constantly drifting in and out of your field of vision. Even with my souped up, auto-tracking guns, my first attempt at combat ended with me dying in a shower of sparks and flying metal. It was the turning speed that got me–trying to keep a bogie in sight if you’re going full throttle is a recipe for frustration. You’ve got to play with the throttle, a bit like a racecar driver. We’ll have to see how well it holds up to prolonged sessions, but my 25 or 30 minutes of dogfighting were a complete blast.

Of course, it’s hard to be down on a project when you’ve got the creator in the room with you, and Dave Braben is nothing if not excited.  Throughout the whole hour long demonstration, he had ready answers whenever I tried to ask about details or world lore. How do players find one another in game? Long range scans are based on heat signature–the hotter your ship gets, the more visible it is at long range. What role do capital ships play in game? “Factions use them for force projection, but functionally they serve as mobile docking stations.

What really impressed me was the sheer attention to detail. Ship heat isn’t simply a game mechanic–the ships themselves are designed with heatsinks, large panels that glow white hot during a dogfight. Want to land your ship? Better make sure your landing struts are deployed, or you’ll bounce off the landing pad. Braben even claims that Elite will model authentic starscapes for different solar systems–the sky around the Earth should look familiar, but will appear totally different in orbit around Alpha Centauri. It seems like an awful lot to promise, but from what I’ve seen of Elite: Dangerous so far, I’m ready to believe almost any hype the developers want to throw at me.