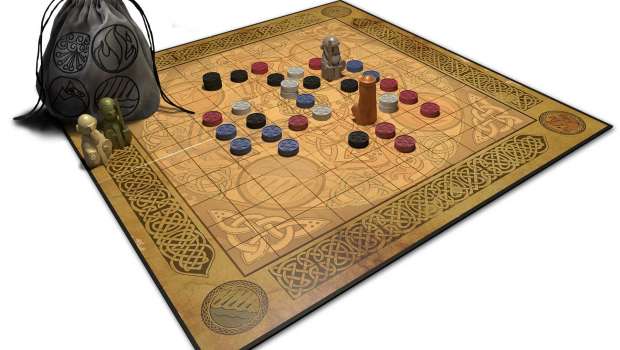 In late August Rather Dashing announced that they were releasing the abstract game Element.  Here’s what they have said about the game:

Element, the latest release from the creative minds at Rather Dashing Games, is a unique strategy game for 2 to 4 players, ages 14 and up. Players take turns drawing and placing Element stones to encircle their opponents’ Sages (player pieces). Each Element has unique properties used to block an opponent’s movement. Feed walls of flame, move raging rivers, raise impenetrable mountain ranges and even bend wind to your command.

Transform one Element into another with the Rule of Replacement or sacrifice stones to help your Sage avoid capture. Understanding the subtle, diverse and powerful nature of the four Elements is the key to surrounding your opponent and claiming victory.

Interactions between the four Elements and the Sages ensure that the game never plays the same way twice. Element’s rich gaming experience makes it perfect for tournaments and organized play. Boardgame Corner gave Element the first-ever Cornerstone Collection Award prior to its release, praising it as “a great strategy game with some puzzle-like elements. One of those games that keeps you coming back for more, with every experience being unique in some way.”

The game looks amazing, and Rather Dashing makes some great easy to learn games. It’s available for preorder now, and if you do you’ll get a bonus promo pack of four cards that help remind you how the elements interact with each other.  You can find more information about Element at their web site.