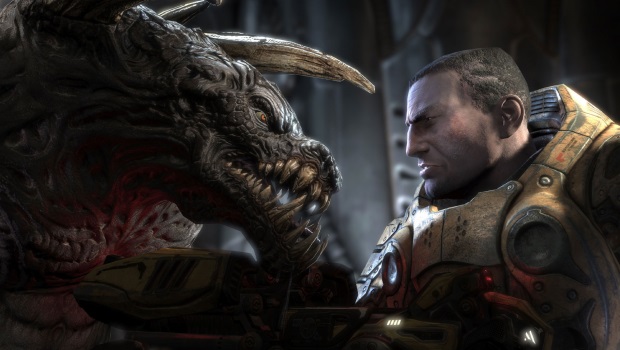 Polygon reports that no less than three representatives of Epic Games, including Vice President Mark Rein, have taken to Twitter to build hype for an incoming Unreal Tournament related announcement. “You want to know about the future of #UnrealTournament ?” asks @MarkRein. “Tune in to http://www.Twitch.tv/UnrealEngine  Thursday at 2pm ET.  #unrealdev #FirstBlood” To which we can only say: #yesplease.

This new information will be coming less than two months after Epic CEO Tim Sweeney denied that any Unreal Tournament related titles were in development at GDC. If next week’s announcement is, in fact, to present a new Unreal Tournament and not an iOS endless runner set in the Unreal universe, it will be the first we’ve heard of the series since 2007’s Unreal Tournament 3. Unreal Engine 4 games are beginning to come to market, and new Unreal Engines are usually followed by new Unreal Tournaments. However, given how out of vogue arena shooters have been the last few years, its been an open question whether the Unreal name would be again attached to a game series, or if it would be dissolved entirely into the ubiquitous game engine technology. Maybe Epic is just trying to beat former Epic dev Cliff Bleszinski’s new arena shooter project to market. Either way, you can bet that if the words “Bombing Run” are uttered on Thursday’s Twitch stream, I’m going to lose my mind. More news as it develops.