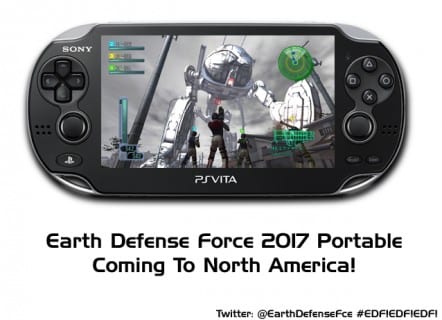 Today Earth Defense Force 2017 was released on the Playstation Vita and a version is set to release in North America during the Winter of next year. The new version of the game will include local as well as online capabilities and will feature additional content not included in the original game.

“Game will support online multiplayer for up to 4 Players —- More insect destruction!
New Missions!  — Extend the bug-popping action!
Pale Wing! — You asked, the EDF answers!
And Much More!!!”

Earth Defense Force 2017 gained a cult following after its release in 2006 despite its poor graphics and reprehensible voice acting — in fact, it was these elements that drew gamers to it. I am admittedly one of these fans and wouldn’t mind reliving some of the guilty pleasure I got from playing EDF for hours on end. Unfortunately, those who don’t live in Japan will have to wait another year before we’re all shouting, “EDF! EDF! YAY!”