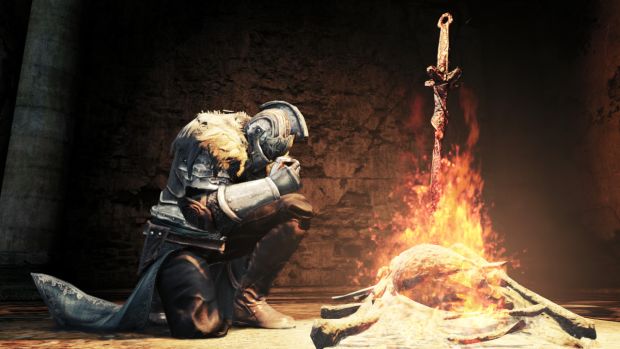 Will it help me die less? This is what we will all be asking when we receive the Black Armour pack after booting Dark Souls II up for the first time, assuming we pre-ordered the Black Armour or Collector’s Edition, of course.

The weapons contained within this pack are not game breaking by any means, but will certainly help players just beginning their quest. If you have played any Dark Souls before, though, you know that death is simply inevitable. You can view a full description of all the items received in the Black Armour pack below.

Yellow Quartz Long Sword and Yellow Quartz Shield – A straight sword and small shield hardened with yellow quartz both uncovered at the bottom of the Iron Keep. Even though these items can break easily due to their high level of corrosion, they are exceptionally light and their power to inflict damage has not declined.

Bound Hand Axe and Bound Wooden Shield – A brutal hand axe and shield found in the Undead Purgatory. Both items are wrapped in chains and thorns to cause additional bleeding on enemies. Both the axe and shield have diminished in overall slashing power but their ability to deliver pain has been deliberately increased.

Homunculus Mace and Homunculus Wooden Shield – A mace and shield with spherical protrusions found in Aldia’s Keep. Although heavier than normal maces and shields, the hard protrusions greatly increase the striking power of the mace as well as the shield’s defensive capabilities.

Transgressor’s Staff and Transgressor’s Leather Shield – A staff and leather shield entwined with an unknown and seemingly lackluster element; these items are found in the Dark Chasm of Old. They have become a catalyst for sorcery and hex and cause an effect known as Darkness.

The Collector’s Edition of Dark Souls II Will also include a Warrior Knight figurine, an artbook, and a full-color fabric map of the Dark Souls II world. Pre-ordering will get you the aforementioned Black Armour pack, but also a metal case and the games soundtrack.

Dark Souls II will be available on March 11th.