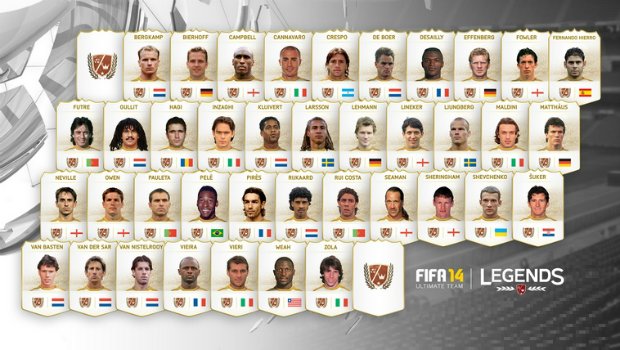 EA Sports had a information purge today on their upcoming soccer title FIFA 14, announcing a new online Co-Op Seasons mode as well as the inclusion of legendary players for Ultimate Team mode.  In addition, the Brazilian National Team and new licenses for the Chilean Primera Division will be introduced in the game, pushing the number of officially licensed leagues to 33, with over 600 clubs and more than 16,000 players.

As in Ultimate Team modes in other EA titles, FIFA players will now be able to enjoy some of the all-time greats on the pitch representing their individual squad.  Legends like Pelé, Gianfranco Zola, or the versatile Ruud Gullit will be able to go up against and play with some of today’s biggest soccer stars.

Also announced is a new online Co-Op Seasons mode, where two online friends can face two other online friends in 2v2 matchups.  The games will be played in a season format, so players will be able to vie for championships and division 1 glory.  In addition, Match Day has been expanded to Seasons and Co-op seasons, allowing for real-world updates and changes to your online experience.

EA SPORTS FIFA 14 will release in North America on September 24 and worldwide on September 27.  The game will also be available on Xbox One and the PlayStation 4 later this year.