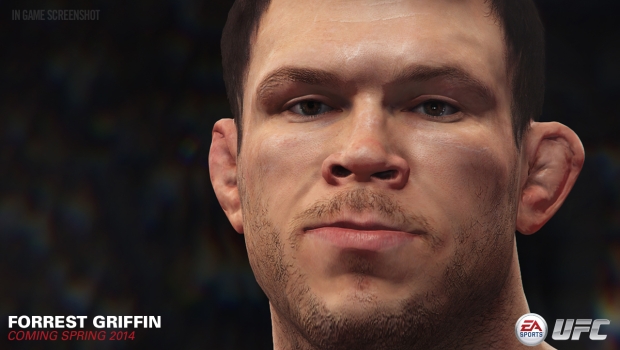 I’ve had some incredible opportunities.  I’ve not only met nearly all of the fighters in today’s EA Sports UFC fighter roster update in person, I’ve also gotten to train with them!   When I say that these pictures are staggeringly close to the real deal, it’s because I’ve seen the real deal up close and personal. As a side note, Minotauro Nogueira’s hands are easily twice the size of mine – it was like shaking hands with a baseball glove.  Before we get to the images, let’s dig into the backgrounds on these powerful athletes.

Forrest Griffin
Looking back at his MMA career, it’s not hard to see why Forrest Griffin has been a longtime favorite of UFC fans around the world. A cast member on the inaugural season of The Ultimate Fighter, Griffin’s televised season-finale bout against Stephen Bonnar became an instant classic and is widely credited with putting the UFC on the mainstream map in North America. Never short on heart, Griffin went on to become a veteran of the Octagon, becoming the Light Heavyweight champion in 2008.

Chan Sung Jung
One of the most popular fighters hitting the canvas for the UFC in recent years, Chan Sung Jung also boasts one of the best nicknames in the game – and a has a style to match. Known for his unrelenting pressure, the “Zombie” never stops coming. Combine that with an incredible ability to absorb damage and it’s easy to see why Jung’s fights are often memorable wars. After winning Fight of the Year honors against Leonard Garcia in 2010, he became the first fighter in UFC history to submit someone with a Twister when he bested Garcia in their 2011 rematch.

Costas Philippou
A constant threat in the UFC’s Middleweight division, Costas Philippou has been hard at work making a name for himself in MMA since taking his first pro bout in 2008. A highly-skilled striker and former professional boxer, the hard-hitting Cyprus native packs enough power to end any of his fights by knockout, and boasts six wins by KO in his MMA career. With another win-streak, Philippou stands to establish himself as a true contender in his division.

Minotauro Nogueira
Truly one of MMA’s living legends, Antonio Rodrigo “Minotauro” Nogueira has the distinction of being the only fighter in history to have won both the UFC and PRIDE Heavyweight belts. Throughout his storied career, Minotauro has racked up wins over the top talent in his division while earning himself a reputation as a fan favorite thanks to incredible displays of toughness and amazing comeback victories.

Demetrious Johnson
When looking at the UFC’s Flyweight division, the first name that should come to mind is Demetrious “Mighty Mouse” Johnson. Not only is the Kentucky native widely recognized as one of the quickest fighters on the planet, but after becoming the division’s inaugural champion in 2012, the belt has never left his waist. Currently on a six-fight undefeated streak, Mighty Mouse defended his title three times in 2013, and seems to only be improving with every bout.

Rashad Evans
One of only three Ultimate Fighter season winners to go on to claim a UFC Championship, “Suga” Rashad Evans has been a staple of the Light Heavyweight division’s Top Ten for as long as most fans can remember. With outstanding wrestling and lightning quick hands, Evans has claimed victories over a murderers’ row of UFC legends including Rampage Jackson, Chuck Liddell, Dan Henderson, Stephan Bonnar and Forrest Griffin.

Chael Sonnen
Perhaps the most polarizing figure in the history of the UFC, everyone has an opinion about Chael Sonnen. A talented wrestler with a sharp tongue, The American Gangster never holds back on the trash talk leading up to his bouts and backs it up with an aggressive style once inside the Octagon. His 2010 bout of against Anderson Silva won Fight of the Year and is considered by many an instant classic.

My anticipation for this title is VERY high. I’m eager to see what EA Canada can bring to this franchise. If this significant bump in visual fidelity is any indication, we’ve got something awesome to look forward to this Spring.