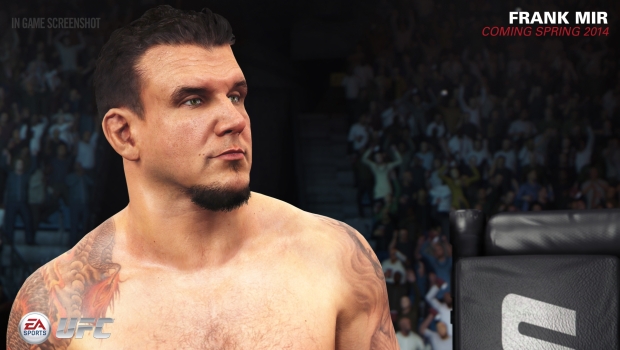 The EA Sports UFC roster is shaping up nicely.  EA Canada unveiled another pack of screenshots and roster update to include UFC 169 main card matchup Jose Aldo and Ricardo Lamas, as well as undercard Frank Mir.   The screenshots focus on the visual fidelity of the faces, but would you look at the tattoo work?!  The dragon on Frank Mir is superb!   I can’t wait to see this game in motion.  Here’s a list of some of the fighters that’ll make their way into the spring-slated title.  You can check out the new screens below the roster update.

EA Sports UFC is heading to Xbox One and PlayStation 4.

Jose Aldo became the UFC’s inaugural Featherweight champion on Nov. 20, 2010 and hasn’t let the title go since. Following his first UFC title defense against Mark Hominick, the former WEC champ hasn’t looked back, defending it five times against some of the division’s top talent, including Kenny Florian, Chad Mendes and Frankie Edgar. Considered one of MMA best pound-for-pound fighters, Aldo is an adept finisher with 15 of his 23 career wins coming by way of knockout.

Since making his professional debut in 2008, Ricardo Lamas has been hard at work cementing his status as a fighter to watch out for in the Featherweight division. After racking up a 4-2 record in the WEC, Lamas transitioned into the UFC in 2011, scoring a first-round TKO win over Matt Grice in his debut. The Bully would go on to log a Submission of the Night performance against Cub Swanson at UFC on Fox: Velasquez vs. Dos Santos and went undefeated in his first four UFC bouts.

Stepping into the Octagon for the first time in only his third pro bout, Frank Mir has been a staple of the UFC’s Heavyweight division since 2001. After winning the Heavyweight title from Tim Sylvia in 2004, Mir was sidelined for 20 months by a near career-ending motorcycle accident. His return to the sport is recognized as one of the greatest comebacks in UFC history, with Mir managing to fight his way back to become the division’s interim champion in 2008. An impressive ground game has helped Mir secure devastating submission wins over, Sylvia, Brock Lesnar, Cheick Kingo and Minotauro Nogueira.

The epitome of a UFC “Hall of famer”, Chuck “The Iceman” Liddell utilized his seek-and-destroy style of stand-up to rack up the second most career knockouts in UFC history, behind only Anderson Silva. Liddell held the Light Heavyweight title from April 2005 to May 2007 and is largely considered to be the top fighter of all time for his weight class. He also boasts one of the most memorable knockout celebrations in UFC history.

A gifted striker possessing some of the most powerful kicks in his division, Cung Le stepped onto the pro MMA stage for the first time in 2006. After debuting with Strikeforce, building a record of 7-1 and briefly holding their Middleweight title, Le made the jump to the UFC in 2011 likening his contract with the company to getting his black belt in MMA. The Taekwondo black belt, most recently scored an impressive KO victory over Rich Franklin and is currently the Mentor and Chief Coach of The Ultimate Fighter: China.

A true MMA veteran, Joe Lauzon has 33 professional fights to his name despite being only 29 years old. A submission specialist, Lauzon is known for his tendency to be involved in exciting bouts, win or lose, and holds the distinction of currently being tied with Anderson Silva as the all-time UFC Fight Bonus leader with 12 awards. After suffering back to back losses for the first time in his prolific career against Jim Miller and Michael Johnson, Lauzon wasted no time getting back to his winning ways, closing out 2013 with a victory over Mac Danzig.

Bantamweight brawler, Mike “The Hulk” Easton began his professional MMA career in 2003 at the age of 20. Following an eight fight winning streak that saw him capture and defend the Ultimate Warrior Challenge’s Bantamweight title. Easton made his UFC debut on October 1, 2011, scoring a TKO win over Byron Bloodworth. He was also notably awarded Fight of the Night honors for his April 6, 2013 split-decision loss to Brad Pickett.

Arriving in the UFC by way of the WEC in 2011, Donald “Cowboy” Cerrone is as well known for his victories inside the Octagon as he is for the trademark hat he sports on his walks out to it. Formerly a bull rider prior to beginning his career in MMA, Cerrone holds wins in 10 of his last 15 professional bouts and has displayed an affinity for finishing fights on the ground, with 14 of his 21 career wins coming via submission.

A striker at his core, Erik “Goyito” Perez holds the distinction of recording the fastest knockout in UFC/WEC Bantamweight history when he KOed Ken Stone in 17 seconds at UFC 150 in 2012. Prior to dropping a tight split decision to Takeya Mizugaki in 2013, Perez was riding an impressive eight fight win-streak which he’ll be looking to start up again as soon as possible.