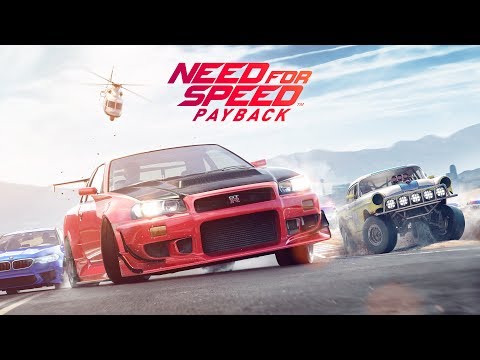 We knew it was coming, but today Ghost Games and EA announced Need for Speed Payback — the next installment in their Need for Speed franchise.  But what’s new under the hood?  Thankfully, Marcus Nilsson, Executive Producer of Ghost Games was ready to reveal that:

“Need for Speed returns this year to challenge what players expect from racing games.  We’re still delivering everything our fans love about the franchise – the deepest customization, an impressive roster of cars, intense races and open world pursuits – but with Need for Speed Payback, we’re bringing together all those elements in an all new blockbuster driving experience. From the story, to the different characters you can drive as, to the varied missions, to the edge-of-your-seat moments, this is our vision for what action driving entertainment means today.”

Set in the underworld of Fortune Valley, players will drive as three distinct characters reunited by a quest for vengeance against The House, a nefarious cartel that rules the city’s casinos, criminals and cops. They will take on a variety of challenges and events as Tyler, the Racer; Mac, the Showman; and Jess, the Wheelman to earn the respect of the underground. Featuring the deepest customization from the series, players can truly craft a personalized and unique ride, or spend hours finding and tuning an abandoned derelict into a supercar. They can then push their cars to the limit and raise the stakes by betting on their own performance, where they can either multiply their winnings or risk losing it all.

If you are getting some déjà vu for arguably the best Need for Speed title to date, Need for Speed Most Wanted, I doubt that’s on accident.  If you are also getting a Fast and Furious vibe, I doubt that’s a coincidence either.  It’s clear that Ghost is looking to recapture the thrill of the chase and escape mechanics of some of their previous efforts, and I can’t be more excited to hear it.  Undoubtedly we’ll get to see the game in motion at E3, but until then, chew on the new trailer below.

It’ll also come as no surprise that there’s a pre-order bonus for Need for Speed Payback.  Entititled the “Platinum Car Pack”, if you snap the game up early you’ll pick up a Nissan 350Z 2008, as well as the Chevrolet Camaro SS 1967, Dodge Charger R/T 1969, Ford F-150 Raptor 2016, and Volkswagen Golf GTI Clubsport 2016, with Ghost tossing in a custom “platinum blue tire smoke” bonus.

You won’t have to wait long — the game is racing to shelves on November 10th (with EA Access and Origin Access subscribers getting their hands on a 10 hour trial on November 2nd) for Xbox One, PlayStation 4, and on PC via Origin.