Developer Beenox and Activision are teaming up to bring us a new angle on a familiar face.   I’m talking about the all new Spider-Man: Edge of Time.  Bringing on Peter David, the co-creator of the Spider-Man 2099 franchise to pen the story, the game has retained the more linear approach to focus heavily on story, eschewing the sandbox of the previous titles.  The storyline starts off pretty simple – a scientist named Walker Sloan has worked to create a machine to allow him to travel from 2099 into the past to start the Alchemax Corporation in the present, capitalizing on the market using his advancements from the future.  Unfortunately, and this is pretty common among the mad scientist types, he’s torn a hole in time space and has caused an alternate timeline to emerge.   Now things are complicated…

Peter Parker has found out through this rift in time the exact time and place he will be killed.  Unfortunately he doesn’t know why or how, but it is certain.  Thankfully for Peter, Miguel O’Hara, also known as Spider-Man 2099, has somehow through the rift gained the ability to communicate across this alternate timeline with Parker.  Together they are setting out to save Peter Parker in an adventure that spans both space and time.

The demonstration I saw showed that Sloan has taken control of Venom and has altered him in some way, enabling him to be controlled.  His powers have been somehow reversed, curing him of the symbiote and giving him the ability to use his powers for good.  Instead of his suit causing damage, it in fact heals.  While this would help a normal person, it will pull the radiation out of our favorite webslinger, making him a mere mortal once again.  This isn’t a good day for Parker either – Anti-Venom is leading him directly towards the place where he will die.  He has no choice but to push himself towards his own death to save humanity.

The two Spider-men are very different – The Amazing Spider-Man can use his incredible range, slinging webs, crawling walls, chain attacking, and the usual attacks.  He also has a new move called Hypersense which acts as an extension of his Spider sense, allowing him to sense, dodge, evade, and far faster than any enemy he might face.   Spider-Man 2099 has a completely different approach – up close, brutal, and very personal.  Miguel doesn’t have Spider-sense, but he has something called Accelerated Vision, allowing him to move so fast as to be in two places at once.   He can use this ‘decoy’ version of himself to tear apart his enemies without risking his health by being up close.

When Sloan created his time gateways to connect the two timelines together, they are linked at specific points and the actions in one timeline can immediately cause changes in the future.   This is a major part of the gameplay in Edge of Time, allowing the actions of Peter Park to drastically change things for Miguel.  In the demo we saw a set of Regulators accidentally get destroyed by Parker, releasing deadly toxins that are slowly killing Miguel.  To prevent Miguel from being killed, Parker has to rewrite the events of history and prevent the nuclear meltdown.

The big hook in Edge of Time is cause and effect.   Changes in the past may cause a path to be sealed, destruction, or even your objectives to change completely as time is altered.  Even simple changes in the past may cause large changes, with the outcome not always being what you might expect.  These cause and effect moments trigger transition points between the two Spideys, allowing you to see exactly what your changes have wrought.

With Josh Eaten and Christopher Daniel-Barnes returning to voice the two Spider-Men and an interesting twist on everyone’s favorite web-slingers, it looks like Beenox has something interesting for us when the game releases this Fall. 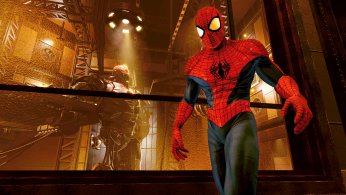 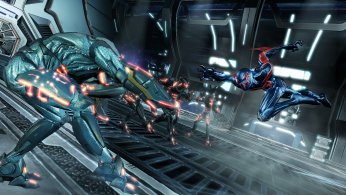 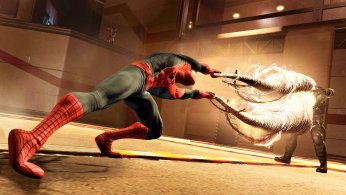 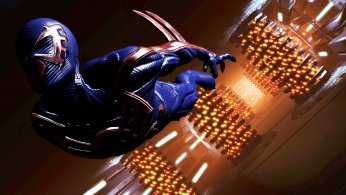 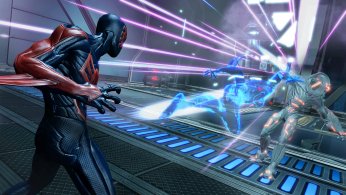 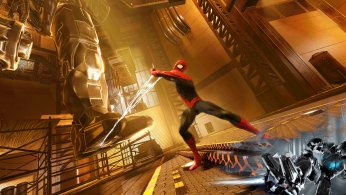 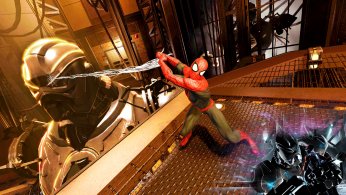 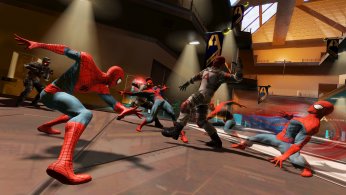