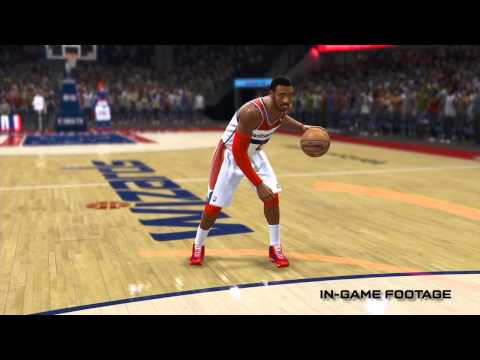 A trio of videos have been released by EA Sports, showcasing the dribble move controls system BounceTek in their upcoming game NBA Live 14.  The videos show off some of the ways momentum, rhythm, and pacing can lead to big, open lanes to the basket.

The first video, shown below, is just a short and basic look at the first step dribble moves in NBA Live 14, activated with the right stick.  They look very fluid, and the movement of the player corresponds well to what he is doing with the ball.  At a glance, the animation doesn’t appear much more fluid than the current generation, but the complexity of the moves themselves have been raised, allowing for more intricate ball handling abilities for the league’s best.

The second clip shows some of the ways moves can be branched off of a starting move, which in this case is the hesitation.  The way moves uniformly flow into one another is very impressive.  It would be nice to see how these moves will trick defenders, but even without a defender it is easy to see how effective a well placed chain of these moves could be.  Around the basket scoring has always been a detriment in basketball video games, and the biggest offender of that glue-trap defenders who can move into your lane regardless of momentum.  NBA Live 14 claims that the BounceTek feature will “control the dribbler’s momentum in order to create a balance between dribbler and defender,” a claim that if made good on will help make this game a success.

The final video shows some of the dazzling signature moves available to the game’s best ball handlers.  With the use of a modifier button, the right stick becomes a signature stick, giving the player six separate moves to work with.  While that sounds great, the video doesn’t really do a great job of showing off what they are capable of.  The moves are visually stunning, but without game action it is hard to tell whether they are just flash or will be truly effective.

Fans in North America can pick up NBA LIVE 14 on Tuesday, November 19, for the Xbox One and PlayStation 4.  Be sure to check the NBA LIVE website, Facebook and Twitter for updates.