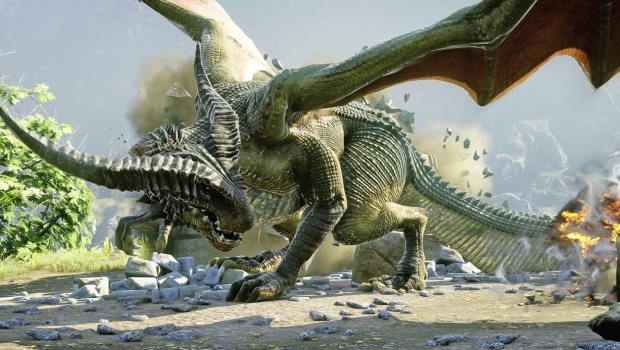 Today we’ve gotten our hands on half a dozen new screenshots for the incredible looking Bioware RPG, Dragon Age: Inquisition.  These screenshots show off the Western Approach – a wasteland territory that nicely juxtaposes the beautiful forested areas we’ve seen up to this point.   Here’s a little bit about these two areas from the Bioware Blog:

The Fortress of Adamant

The entire Western Approach had become a wasteland, and thus the expense of maintaining the fortress became harder and harder to justify. There were no more griffons to fill its weyrs, too few Wardens to man its battlements, too many good men and women killed by demons creeping through the thin Veil…

The Grey Wardens and The Darkspawn

The First Blight had already raged for 90 years. The world was in chaos. A god had risen, twisted and corrupted. The remaining gods of Tevinter were silent, withdrawn. What writing we have recovered from those times is filled with despair, for everyone believed, from the greatest Archons to the lowliest slaves, that the world was coming to an end.

Dragon Age: Inquisition is the third title in the Dragon Age series, and is heading to PC, Xbox One, PlayStation 4, Xbox 360, and PlayStation 3 on October 7th.